No, this video does not include an admission by the Pakistani army that 200 militants were killed in airstrikes by the Indian Air Force in Balakot

A video has been viewed tens of thousands of times in multiple social media posts which claim it shows a member of the Pakistani army revealing that 200 militants were killed by Indian Air Force airstrikes in Balakot in February 2019. But the claim is false; the video has been recirculated from an unrelated event in Pakistan; the footage contains no such admission.

The video was posted on Twitter here, where it has been viewed more than 54,000 times since it was posted on March 13, 2019, and on YouTube, for example here.

The tweet says: “#Pakistan military officer admits to "martyrdom" of more than 200 militants during Indian strike on #Balakot. Calls the terrorists Mujahid who receive special favors/ sustenance from Allah as they fight to support PAK government [against enemies]. Vows to support families”

This Facebook post containing the video has been viewed more than 800 times since it was published on March 14, 2019.

The caption states in English: “Pakistan military officer admits to ‘Killing’ of more than 200 militants during Indian strike on #Balakot. Calls the terrorists Mujahid who receive special favors/ sustenance from Allah as they fight to support PAK government [against enemies].”

Other Facebook posts viewed hundreds of times carried the video with a similar claim, for example here and here. 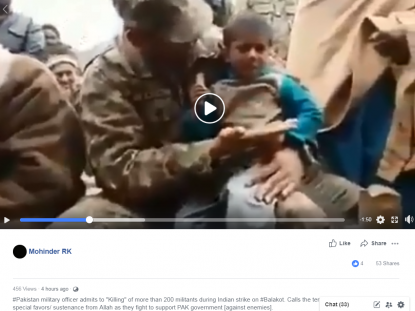 The posts were shared after India claimed it had bombed a militant camp and killed a large number of insurgents in disputed Kashmir on February 26, 2019. Pakistan said February 27 that it had shot down an Indian jet. Here is an AFP story on the situation.

AFP analysed the audio of the misleading Facebook video and established that no one heard speaking in the footage makes any conclusive statement about the death of 200 militants and the Balakot airstrikes are not mentioned at all.

In the video at 0.50 seconds, a man wearing army fatigues lifts a distressed child onto his lap in a bid to console him.

Simultaneously, a person speaking from behind the camera can be heard saying to the boy in Urdu: “This honour is received by few special men of Allah, not everyone receives it. You were told yesterday 200 men went up the mountain, it was written in his fate to get martyrdom. It was not written in our fate.

“We climb up daily, go and come back and this is for special men of Allah who have His special blessings, it's not in everyone's fate.”

A reporter in AFP’s Islamabad bureau listened to the Urdu-language audio and found the conversation described 200 men going up into the mountains and one dying.

The caption of the second video, written in Urdu, says the clip was captured at a funeral for one man in Shinagar, Pakistan.

The caption translates to English as: “Today funeral prayer was held for martyr Ehsanulah in Shingarhadarra village Shingar Gul. 2nd Baloch (regiment) Colonel Faisal Qureshi and Major Nauman and a large number of local bodies' representatives attended the funeral prayer and Pakistan army present salute to martyr Ehsanullah and Colonel announced all kind of cooperation with orphaned children. Brothers of martyr Ehsanullah declared their brother's martyrdom worthy of pride. Do remember Ehsanullah Khan was member of national lashkar (vigilante) and was martyred at Nawkay due to a heart attack.”

The man wearing army fatigues seen at the one minute mark of the second video is the same man as is seen in the misleading Facebook clip.

Below is a screenshot showing a comparison of the misleading Facebook clip (left) with the video which purports to show a funeral in Shinagar (right):

In both images, AFP has circled in red the badges on the man’s uniform which say ‘Faisal’. On the right hand image, AFP has also circled a badge which reads ‘Pak Army’.

The beginning of the second clip which purports to show a funeral in Shinagar shows a group of men wearing army fatigues walking through a snow-covered mountainous area.

Below is a screenshot of the scene: 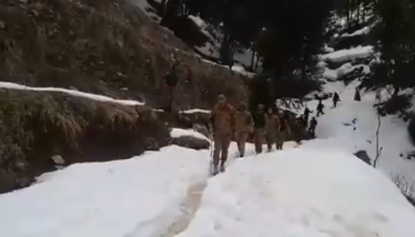 Snow can also be seen in the background of the misleading Facebook video.

Below is a screenshot of a scene in the misleading Facebook video with snow circled in red:

AFP has analysed weather data which suggests it is unlikely there would have been thick snow in Balakot in February 2019, when Indian airstrikes hit the town.

Here is the data on the Wolfram Alpha website.

During February 2019, the temperature in the area ranged from between -2 degrees celsius to 11 degree celsius, the data shows. There was a 17.5 percent chance of snow on five days.

Below is a screenshot of the findings on the Wolfram Alpha website: 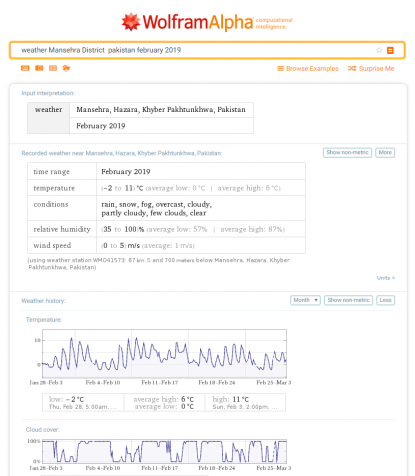 A screenshot of the weather data on Wolfram Alpha 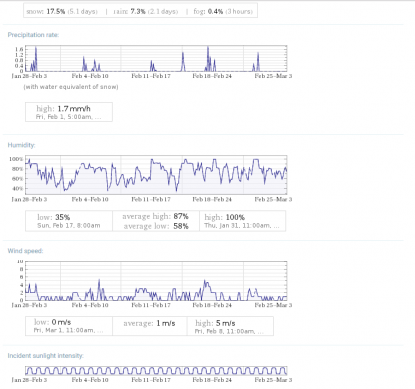 A second screenshot of the Wolfram Alpha weather data

News images from Balakot after the Indian Air Force airstrikes in February 2019 do not show any snow.

Below is an AFP image from February 26 which shows Balakot after the airstrike: 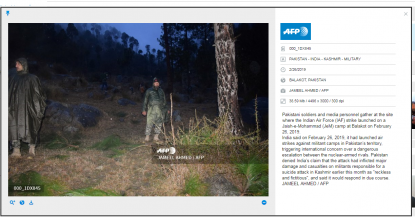 A screenshot of the AFP image showing Balakot on February 26