No, the UAE has not banned three-month tourist visas for Nigerians

Widely-shared articles and social media posts have claimed the government of the United Arab Emirates (UAE) has placed a ban on issuing three-month tourist visas for Nigerian passport holders, following the arrest of five Nigerians in the country in connection with a robbery. But travellers need not worry: UAE authorities have confirmed that the visa policy has not changed.

A tweet (here's an archive link) by popular political commentator Kayode Ogundamisi questioned why the UAE would punish law-abiding Nigerians after five of their compatriots were allegedly involved in a robbery in the country last week. 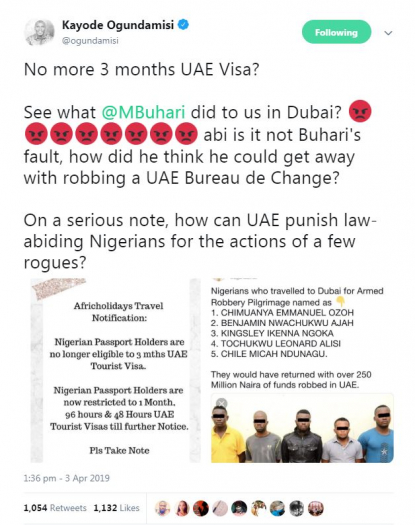 Screenshot taken on April 5, 2019 showing a tweet by Kayode Ogundamisi

The post by the newspaper’s Facebook page and Adeyanju has been shared more than 1,000 times on the social network. 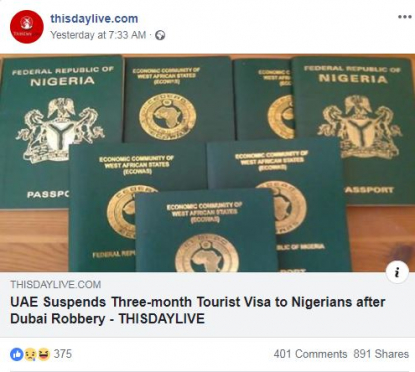 Screenshot taken April 5 2019, showing the article by This Day newspaper

The This Day article cited an Instagram post by Lagos-based travel operator Africholidays which said Nigerians were now restricted to one month, 96-hour and 48-hour tourist visas in the UAE. The post has more than 600 likes. 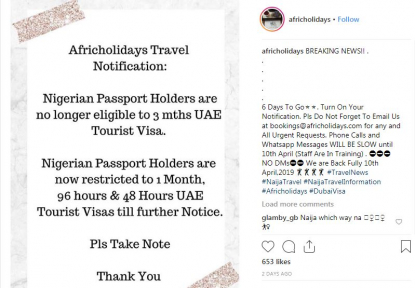 The Herald newspaper also ran the story based on the Instagram post while another news source, AllAfrica, shared the THISDAY story on its verified Facebook page.

Police in Sharjah, just north of Dubai, said on Sunday that five Nigerians were arrested on suspicion of robbing a Bureau De Change in the city. Local media reported that robbers had made away with 2.3 million dirhams ($626,000). The Nigerians were reported to have entered the Gulf country on March 18 and are accused of carrying out the robbery two days later.

AFP contacted the visa processing office of the UAE in Dubai. An agent said Nigerian passports were still being processed like those from any other country, indicating no ban had been imposed. A UAE government source also confirmed to AFP that rumours of a ban on Nigerian three-month visas were “fake news”.

On Thursday night, the UAE embassy in Abuja further announced that reports of visa restrictions were “inaccurate” and advised people of “the importance of sourcing news from its official channel”.

In light of the press reports published today alleging that the UAE has suspended issuing tourist visas to Nigerian nationals, the UAE Embassy in Abuja announces that these news are inaccurate and stresses the importance of sourcing news from its official channel pic.twitter.com/Eu9UsNlIla

No, this is not a genuine news article stating Indonesia is 'offering' a major city to China

No, this image does not show Turkish leader Erdogan declaring support for opposition candidates in Indonesia’s presidential election