No, these two photos do not show Indian Air Force jets shot down by Pakistan

Multiple posts on Facebook, Twitter and YouTube, and mainstream media reports, contain photos purporting to show two Indian Air Force jets shot down by Pakistan in disputed Kashmir. This claim is false; the images are from two separate plane crashes – one in 2016 in the Indian state of Rajasthan and the other in 2015 in the state of Odisha.

The misleading images emerged hours after Pakistan said it had shot down two Indian warplanes in its airspace. Here is an AFP story on that incident.

Kazmi's Twitter account has more than 400,000 followers and is verified. He describes himself as a former correspondent for national newspaper Dawn and TV network Samaa. 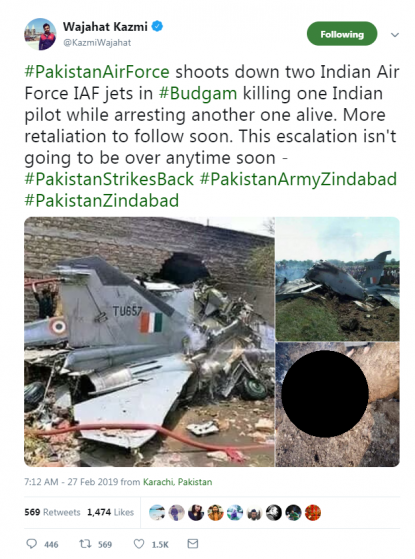 The same images of the burning planes have also been shared on Facebook, for example here, used in media reports about Pakistan shooting down the Indian jets, such as here, and posted on YouTube for example in this video, where it has been viewed more than 4,000 times in the hours since it was uploaded.

The two planes' tail numbers, TU657 and A3492, are clearly visible in the pictures carried by the misleading post, as can be seen in the composite image below: 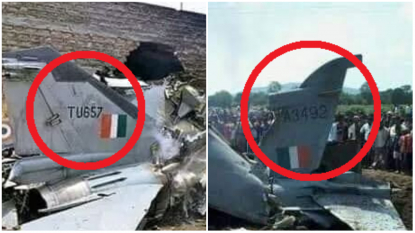 The picture of the jet with the tail number TU657 is an AFP image dated August 1, 2016. Here is the photo on AFP's Image Forum.

The photo's caption says: "Officials gather around the remains of an Indian Air Force Mig 27 fighter jet that crashed into a residential building in Jodhpur in India's western Rajasthan state on June 13, 2016."

Local media reports also covered the Jodhpur crash at the time and used the same AFP photo, for example here in The Tribune. Here is an NDTV report of the same crash. An AFP photo of an Indian Air Force fighter jet that crashed in Rajasthan in June, 2016 (AFP)

The picture of the plane with the tail number A3492 is from a 2015 crash in Odisha. The same image is used in this report in The Hindu published June 3, 2015. Here is an Indian Express report on the same incident. Screenshot of The Hindu report on the 2015 Odisha plane crash

Some Indian media outlets have also debunked the misleading use of the photo, such as here by India TV news.