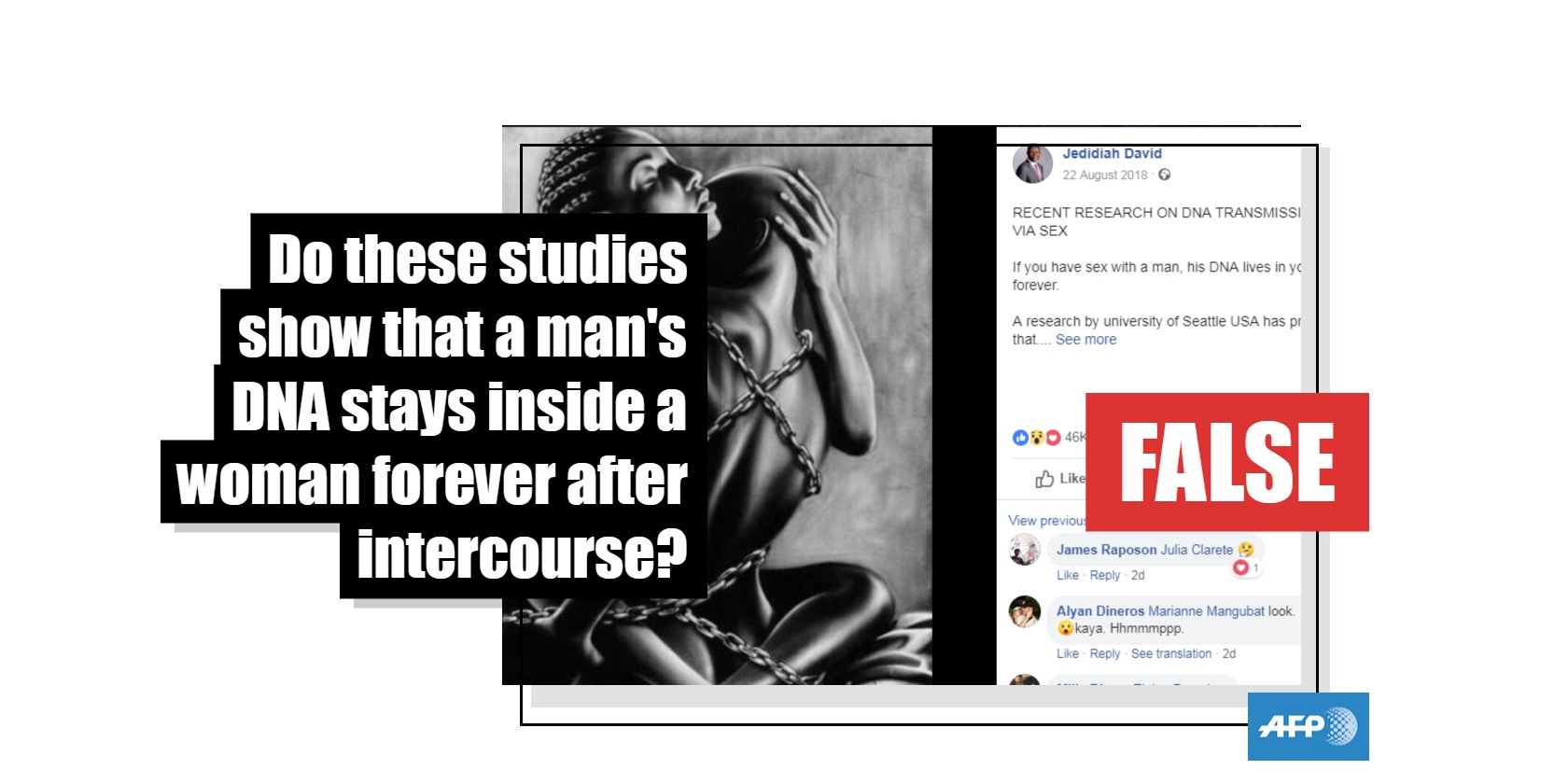 No, these scientific studies do not show that a man’s DNA stays inside a woman forever after sexual intercourse

Posts shared widely online claim that a study from the "University of Seattle" proves that a man’s DNA stays inside a woman forever after sex. But the two studies apparently supporting the claim did not come to that conclusion. They instead found that male DNA resides in the brains of some women, and was likely transmitted through pregnancy, not sexual intercourse.

A Facebook post on August 18, 2018, by Jedidiah David, a pastor based in Nigeria, referred to a study by the "University of Seattle" as proof that sex before marriage was wrong, encouraging followers to educate young girls to be virgins. It accompanied an image showing a man and woman tied together by chains during intercourse. The post was shared more than 60,000 times on Facebook.

A screenshot taken on January 18, 2019 of a Facebook post by Jedidiah David, claiming that a man’s DNA stays inside a woman forever after sexual intercourse

Similar versions of the same post have appeared in other social media posts and articles. An earlier version of the claim was published by Yournewswire.com in 2017. The post by Jedidah David appears to have been copied from the article as the wording is nearly identical.

A screenshot taken on January 18, 2019, of an article by Yournewswire.com claiming that a man’s DNA stays inside a woman forever after sexual intercourse

The Yournewswire article linked to a journal article detailing a study conducted by academics from the University of Washington and the Fred Hutchinson Cancer Research Centre, both of which are in Seattle.

The study concerned male microchimerism, or Mc, present in some women’s brains. This is when cells from a man are found in a woman. The scientists found that 63 percent of women studied harboured male Mc in the brain, and concluded that the most likely source of this was from pregnancy with a male fetus. In women without sons, male DNA could also be acquired from an abortion or a miscarriage, the study said.

The article in Yournewswire claimed the conclusion was, “the safe, politically correct assumption” and accused the researchers of  “living in denial”.

The article concluded with its own interpretation of the study, without providing evidence, claiming that women harbour male DNA through sexual intercourse.

Another study quoted in the report was from the National Center for Biotechnology Information. That study’s conclusion speculates on other possible and uninvestigated sources of male microchimerism besides pregnancy, mentioning sexual intercourse as only a possibility.

An article published June 30, 2017 by World.parhlo.com carrying the same content as the Yournewswire story has been shared on Facebook more than 7,200 times.