No, these photos do not show the state of a business district in Indonesia's capital during the administrations of current, previous governors

Multiple Facebook posts have shared two pictures they claim show Tanah Abang, a business district in Jakarta, during the tenure of the city’s current governor and that of his predecessor. The posts are misleading; neither image was taken during the two governors'  successive administrations.

The misleading post, which has been shared hundreds of times on Facebook, for example here and here contains two photos: one of a relatively quiet street, the other of a street blocked by cars and scooters. 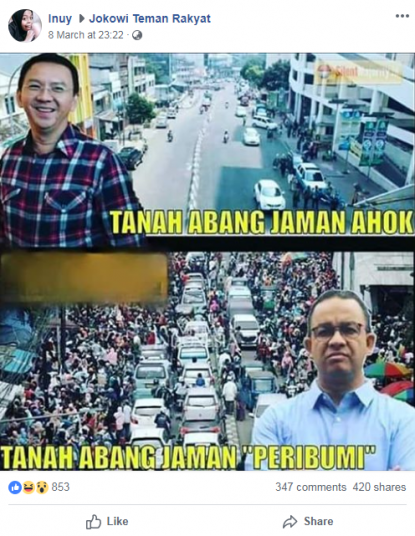 “Ahok” is the nickname of Basuki Tjahaja Purnama, who served as governor of Jakarta from 2014 to 2017. A photo of him has been added on the left hand side of the street image.

"Peribumi" is likely a misspelling of the Indonesian word "pribumi", which means indigenous or native Indonesian. It is a reference to current Jakarta governor Anies Baswedan, who used it in his inauguration speech on October 16, 2017. A photo of Baswedan has been added on the right hand side of the street image.

AFP conducted a reverse image search of the photo purportedly showing the area during Anies Baswedan's administration and found was used in this article from Jakarta-based news outlet Media Indonesia published on May 16, 2017.

Baswedan was sworn in as Jakarta governor on October 17, 2017. 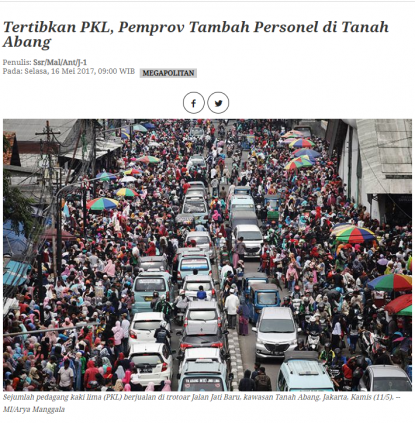 Screenshot of the Media Indonesia article with the original photo.

AFP conducted a reverse image search on the top photo purportedly showing the area during Purnama’s administration and traced the photograph back to this August 13, 2013 image published on Merdeka.com which shows the Tanah Abang business area.

Purnama was sworn in as Jakarta governor on November 19, 2014.

At the time the image was taken, the Jakarta governor was now-President Joko Widodo. Purnama was his deputy governor.

A translation of the Indonesian headline reads: “Ahok says the situation in Blok G -- where new kiosks sold unlawfully by applicants -- resembles that in Marunda"

Blok G refers to the Blok G building in Tanah Abang market, which was constructed to house street vendors outside the market.

"Marunda" refers to a low-cost apartment provided by the Jakarta city administration in the north of the capital. 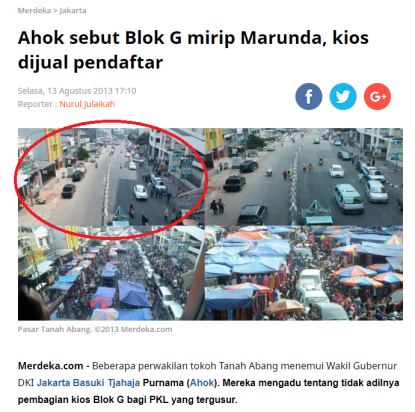 Screenshot of the Merdeka.com article with the original photo.

No, this video does not show members of an Indian Hindu nationalist group torturing Muslim women

No, this photo does not show a Chinese ship attacking Philippine vessels