No, these cars did not melt due to hot weather

A photo of two partially melted cars has been shared hundreds of times in multiple Facebook posts that claim hot weather in Saudi Arabia caused the vehicles to melt. Other misleading posts combine the same photo with claims it shows the result of hot weather in other locations, or a forest fire. All the claims are false; the cars were melted by heat from a construction site fire in the US city of Tucson in June 2018.

The post has a Hindi-language caption, which translates as: “In Saudi Arabia, temperatures went up to 62 degree Celsius as reports are coming in of cars parked in the sun have their fiber parts melting.” 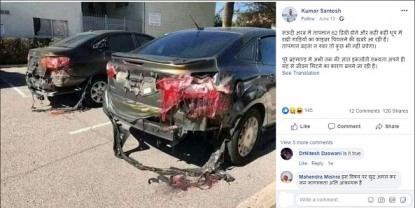 The same photo has also been shared on Facebook here and here in June 2019 with the caption: “Today It Was 52°C In Saudia Arabia”.

Other Facebook posts, for example this one published June 28, 2018, say the cars were “melted by scorching heat in Oman”; this post says the cars "melted in 62 degree heat” but does not say where.

And this Facebook post, published June 24, 2018, and shared more than 950 times since, combines the same photo with the caption: “Hot Temprature in Arizona due to fire in forest is melting cars”.

The same photo was also published in this tweet on June 22, 2018 with an incorrect claim that the cars melted due to the weather.

All these claims are false; the photo actually shows cars melted by a fire at a construction site in Tuscon, Arizona.

The caption states: "From across the street where the student housing construction project fire happened last night." 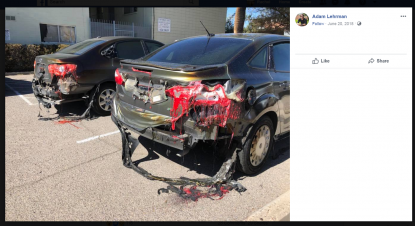 Keyword searches on Google found this report about a fire in the US city of Tuscon, Arizona, by Tucson News Now, a local news organisation based in Tucson also published on June 22, 2018.

It states, in part: “The blaze was so hot and bright, it lit up the morning sky and melted cars in a parking lot next door”.

Below is an image comparing the photo in the misleading Facebook posts (L) with a screenshot of the Tucson News Now report (R), which includes a photo taken from a different angle of one of the melted cars. AFP has circled the matching section in yellow:

Multiple video reports from the same fire in Tucson by local news channel KGUN9 were published online here on June 19, 2018.

Here is a Facebook video post by the Tucson Fire department showing the intensity of the fire.

The caption of the video, which is embedded below, says: “An on-scene look at what our crews battled early this morning during a two alarm fire.

"Cranes, cars, trees, and buildings were all damaged due to the extreme temperatures but most importantly, no one was injured”.