No, these are not photos of funerals for victims of the April 21, 2019 Easter Sunday bomb attacks in Sri Lanka

Three photographs have been shared on Facebook in multiple posts in April 2019 alongside claims that they show the funerals of victims of the Easter Sunday bomb attacks in Sri Lanka. The claims are false; the images are actually photographs by the AFP and AP news agencies from 2006 and they show funerals for dozens of people killed after a bus hit a landmine in northern Sri Lanka.

One photograph, shared here on Facebook on April 24, 2019, shows a huge crowd of people carrying a long line of coffins down a road.

The caption says: "Funeral procession In Sri Lanka Murderer Victims by ISIS Their memories be eternal !!!"

A series of bombings at Sri Lankan churches and hotels on Easter Sunday April 21, 2019, left more that 250 people dead in attacks later claimed by the Islamic State group. Here is an AFP report. 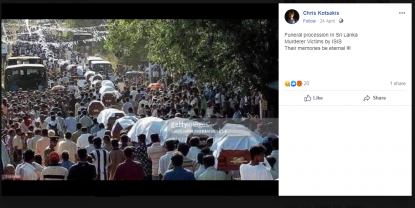 A reverse image search of the photo found it was actually an AFP image taken on June 16, 2006.

The original photo can be seen on AFP Forum here.

The AFP photo caption says: "Sri Lankan mourners carry the coffins for 61 victims killed in a bomb attack at Kebitogollewa in north-central Sri Lanka, 16 June 2006. A powerful land mine ripped through an over crowded bus 15 June, killing 64 people including 15 children, and wounded 80 others in an attack blamed on Tamil Tiger rebels, who have denied involvement."

Here is an AFP report on that incident.

Below is a screenshot of the original AFP photo: 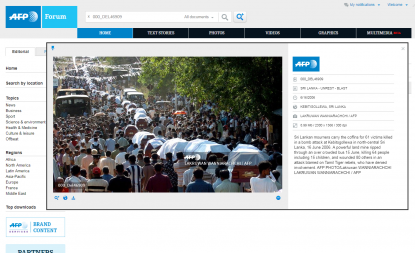 A similar photo was posted on Facebook here on April 23, 2019, two days after the Sri Lanka Easter Sunday bomb attacks, and has since been shared more than 2,800 times.

The post's caption says: "Funeral Of Victims - Sri Lanka. Eternal rest grant unto them, O Lord, and let perpetual light shine upon them. May the souls of the faithful departed, through the mercy of God, rest in peace. Amen." 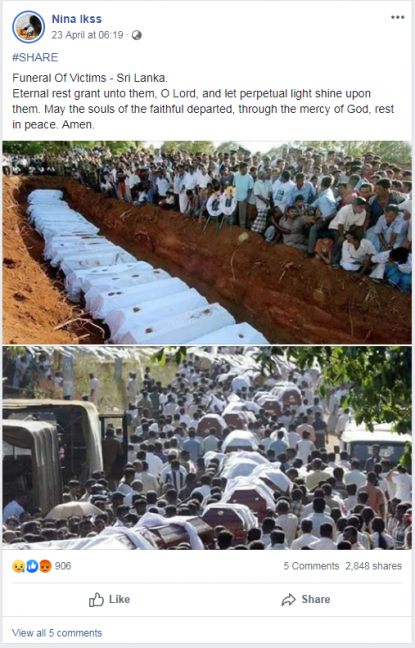 The same photographs and claims have been shared repeatedly on Facebook, for example here and here, and on Twitter here.

Both of the photographs in the second post also show the same June 16, 2006 funerals in Sri Lanka for victims of the landmine attack.

A reverse image search for the top image found it was an AFP photo from 16 June, 2006. The original photo can be seen on AFP Forum here.

The caption reads: "Sri Lankan mourners bury coffins for 61 victims killed in a bomb attack at Kebitogollewa in north-central Sri Lanka, 16 June 2006. A powerful land mine ripped through an over crowded bus 15 June, killing 64 people including 15 children, and wounded 80 others in an attack blamed on Tamil Tiger rebels, who have denied involvement."

Below is a screenshot of the image on AFP's Image Forum website:

AFP has previously debunked claims that this image shows funerals for victims of Sri Lanka's Easter Sunday attacks. That fact check can be seen here.

A reverse search for the second photo found the image was taken by the Associated Press news agency.

The photo can be viewed here on the AP website.

The original image's caption says: "People carry coffins of their relatives for burial during a mass burial ceremony for victims of Thursday's landmine explosion by suspected Tiger rebels that killed at least 64 people, in Kabithigollewa village, about 210 kilometers (131 miles) north of Colombo, Sri Lanka, Friday, June 16, 2006. With each side blaming each other for the rising tensions, some 10,000 mourners prayed at a funeral for 61 of the victims, 15 children among them. The bus bombing was Sri Lanka's worst single act of violence since the government and Tigers signed a cease-fire in 2002, and it renewed fears of a return to war."

Below is a screenshot of that photo. 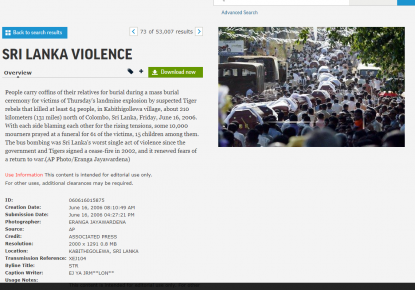 UPDATE: This fact check was updated on May 16, 2019 with a revised death toll.