No, this is not a photo of funerals held after the Easter Sunday attacks in Sri Lanka

A photograph of coffins in a mass grave has been shared on Facebook and Twitter alongside calls to pray for Sri Lanka’s Christian community after more than 250 people were killed in suicide bomb blasts on Easter Sunday. The posts are misleading; the image is actually a 2006 AFP photograph showing mourners after a bus hit a landmine killing dozens of people in northern Sri Lanka.

The photo has been shared on Twitter, for example here on April 23, 2019 with a caption saying: “Today, too, let us join in prayer with the Christian community of Sri Lanka, which was struck by terrible violence on Easter Sunday. We entrust to the risen Lord the victims, the wounded and all the suffering. #PrayForSriLanka”

It has also been shared on Facebook, for example here, posted on April 22, 2019, with a Sinhalese caption saying: “The photo that leads to sorrow,” followed by the #PrayForSriLanka hashtag.

Here is an AFP report on the suicide attacks in Sri Lanka on Easter Sunday, April 21, 2019 which left 258 people dead. 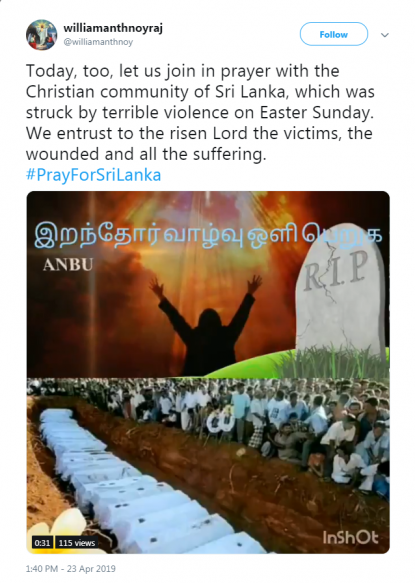 The original photo can be seen on AFP’s Image Forum here.

The AFP photo caption says: “Sri Lankan mourners bury coffins for 61 victims killed in a bomb attack at Kebitogollewa in north-central Sri Lanka, 16 June 2006. A powerful land mine ripped through an overcrowded bus 15 June, killing 64 people including 15 children, and wounded 80 others in an attack blamed on Tamil Tiger rebels, who have denied involvement.”

Below is a screenshot of the original AFP photograph:

Screenshot of the AFP Photo

Here is an AFP report on the 2006 incident, which was also reported in local news media at the time, for example here and here.

UPDATE: This fact check was updated on May 16, 2019 with a revised death toll.