No, these are not photos of a foreigner who was abandoned by his Filipina wife because he ran out of money

Facebook posts are sharing photos they claim show a foreigner who was abandoned by his Filipina wife because he ran out of money. The photos have been used out of context. They are of a refugee who fled war-torn Syria and were published online in 2015, three years before the misleading posts, as part of a crowdfunding campaign.

The photos, which have been posted on multiple Facebook accounts such as here and here in November 2018, show a man holding a child while trying to sell pens. 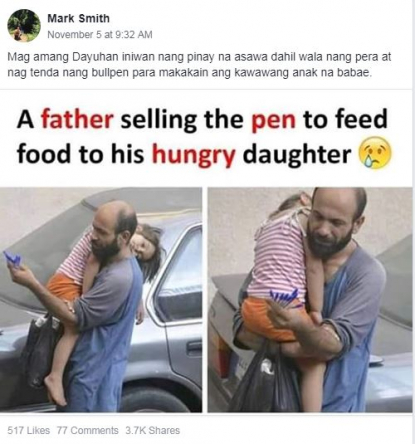 The posts have a caption that say: "A foreigner with a child was abandoned by his Filipina wife because he has no more money and has resorted to selling pens so his pitiful daughter can have something to eat.”

A reverse image search traced the photos back to this crowdfunding page for a Syrian refugee named Abdul Halim al-Attar.

The crowdfunding campaign drew international attention and al-Attar gave an interview with SKY News in which he described his plight, including that his estranged wife was back with her family in Syria.

Below is the 10-min, 52-second interview, in which there is no suggestion of his wife being from the Philippines:

When asked whether al-Attar’s wife was Filipina, Malouf said it was not true.

Below is a tweet from Malouf showing video of al_Attar shortly after the crowdfunding campaign began.

I asked Abdul about his dream.He said he wants to go back home to #Syria, to the way things were. @Buy_Pens #BuyPens pic.twitter.com/kULh9nuOy3