No, there is no evidence that 60,000 Christians been killed in a 'genocide' by "Fulani Herdsmen" in Nigeria

A viral video uploaded to Facebook by a lawyer to US President Donald Trump claims 60,000 Christians have been killed by “Fulani Herdsmen” -- or "Fulani militants" as they're referred to -- in central Nigeria, since 2001, in a “jihad” against Christian ethnic groups. There is no credible evidence for this claim.

The video focusing on a long-running Nigerian conflict over land and resources claims that, since 2001, 60,000 Christians have been killed by “Fulani Herdsmen”. It cites no evidence or reference and has been viewed over 65,000 times on Facebook since September 2018.

Killings attributed to Fulani herders occur in north central Nigeria, also known as the Middle Belt, where the mainly Muslim north meets the largely Christian south. This area is the focus of the video’s claim.

The video was uploaded to Facebook by Jay Sekulow, a personal lawyer to US President Donald Trump. 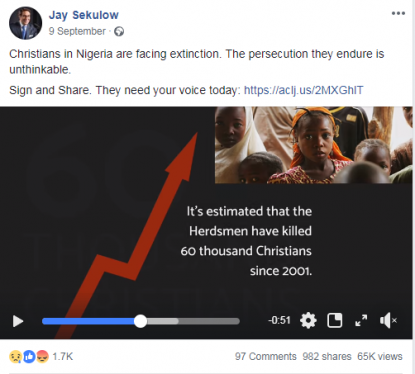 ((A screenshot taken on November 23, 2018 of a Facebook video uploaded by Jay Sekulow, claiming that Fulani Herdsmen have killed 60,000 Christians in Nigeria since 2001))

It originates from the Be Heard Project, an initiative of the American Center for Law and Justice, a conservative Christian lobby group based in Washington DC where Sekulow is listed as "chief counsel".

The group did not answer AFP’s request to explain how it obtained the figure of 60,000 Christian deaths.

Other organisations have published a similar figure of 60,000 deaths, but in each case there is no relevant study or credible evidence cited.

The African Centre for Strategic Studies gave a figure of 60,000 deaths in the conflict, but that combines two different statistics of total deaths in the region over separate time periods. It references a Nigerian government study reported by the BBC, of 53,787 deaths in Plateau State, Central Nigeria between 2001-2004. But the government study is not related to the farmer-herder conflict. The African Centre for Strategic Studies also states that 6,500 people died in the farmer-herder conflict since 2010, citing an article in the Daily Beast which credited a HuffPost report, but the evidence links to an unnamed expert without evidence to support it.

According to the International Crisis Group, political and religious claims of a jihad by ethnic Fulanis are conspiracies which have grown in response to the conflict, which is fundamentally about land-use between mainly nomadic cattle herders and sedentary farmers.

There are no reliable estimates for the total number of deaths since 2001 and no known estimates which divide the deaths along religious lines. The herders are mainly Muslim while the farmers are largely Christian.

In northern Nigeria, clashes have also occurred in states like Gombe, where the majority of farmers are Muslim, suggesting that the underlying causes for the conflict are not religious.

The video by Be Heard accompanies a petition titled, “Petition to Protect Christians from Jihadist Persecution in Nigeria”, which has gained more than 40,000 signatures.

((A screenshot taken on November 23, 2018 of a petition by the American Center for Law and Justice, falsely claiming that Fulani Herdsmen are a jihadist group) )

A number of US-based Christian groups and organisations have repeated similar claims, including Open Doors USA, the US branch of an international organisation that supports “persecuted Christians in the most high-risk places”.

Others include the Gatestone Institute, a right-wing think tank.

Articles and petitions repeating these claims have been shared hundreds of thousands of times on Facebook.