Posts alleging that Ugandan opposition leader Kizza Besigye has been crowned "the world's most arrested man" have been widely shared and even received television coverage. But Guinness World Records confirms the claim is false and that the category is not open for applications.

His many arrests over the years have repeatedly sparked online claims bestowing him with the dubious record title.

NBS TV, a Ugandan television station, shared the latest claim on January 22, 2020 on its Facebook page, which has more than one million followers.

Screenshot taken on January 23, 2020 of Facebook post claiming Kizza Besigye has been bestowed the title “most arrested” man by Guinness World Records

A similar post was shared here on The Investigator, another Ugandan Facebook page with more than  100,000 followers.

Screenshot taken on January 23, 2020 of Facebook post claiming Kizza Besigye has been bestowed the title “most arrested” man by Guinness World Records

An article by Opera News, archived here, makes the same allegations and has had more than 2,000 online interactions, according to social media analytics tool CrowdTangle. 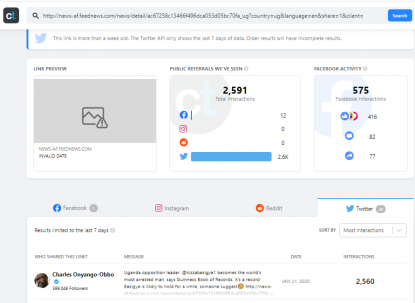 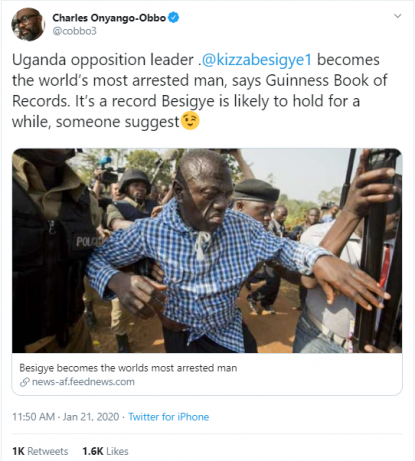 The claim was also picked up by Citizen TV, a local television station in Kenya. The video, titled "Kizza Besigye enters the Guinness Book of World Records as ‘the most arrested man'", received more than 3,000 views on its YouTube channel before it was pulled down. 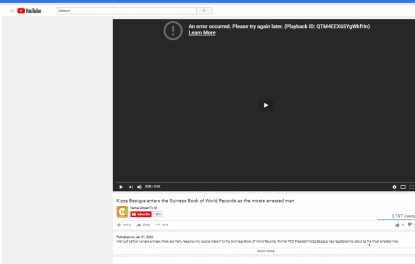 Other posts sharing the claim can be found here, here, here and here.

The tale of the dubious record is not new: in 2016, online news platform Ventures Africa published this article under the headline “Museveni’s long-time rival features in Guinness World Book of Records, all thanks to him”.

The story is almost identical to the recent one published by Opera News.

Is the claim valid?

Guinness World Records spokeswoman Jessica Spillane told AFP the claim was “not true” and that Besigye had "not been recognised for such a title”.

"Although it [the category] is not actively open for applications and we do not encourage people to strive to break the record, the closest category we have is ‘Most arrests’, held by Tommy Johns of Brisbane, Australia, who by 1988 had been arrested almost 3,000 times for being drunk and disorderly in a public place," she said in an email.

Ronald Muhinda, the spokesman of Besigye's FDC party, told AFP there were no official records of the number of times the veteran opposition politician had been in police custody.