No, a Singaporean supermarket chain did not agree to withdraw ‘plastic rice’ from its shelves

Multiple Facebook posts claim Singaporean supermarket chain FairPrice agreed to withdraw packets of its own brand jasmine fragrant rice from the shelves after confirming they contained plastic. The claim is false; the supermarket has said that the rice had passed food safety checks; the jasmine rice mentioned in the misleading posts is still available on the FairPrice website; Singapore’s food agency said it has not found fake rice in the city state.

The post’s caption says: “Do not buy NTUC Jasmine Fragrant Rice... its been confirmed by chemist as plastic rice... NTUC has agreed to withdraw all fake rice product.” 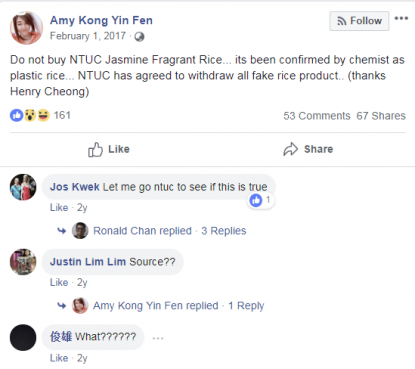 The caption states: “Don't buy NTUC Jasmine fragrant Rice,its was confirmed plastic Rice, my friend is a Chemist n NTUC agreed to withdraw all products of this rice,pls share among
friends/relatives”. 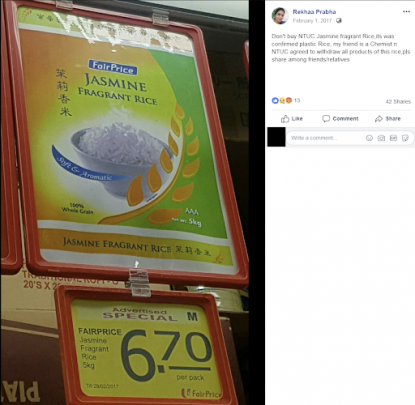 A similar claim was made in Facebook posts here, here, here and here.

The claim in the posts is false; the supermarket chain stated in January 2017 it would continue to sell its jasmine fragrant rice and assured customers that it had passed safety checks.

Here is a statement from NTUC FairPrice posted on its official Facebook page on January 31, 2017.

The statement says: “Dear shoppers, We’ve noticed a recent message on social media asserting that our FairPrice housebrand jasmine fragrant rice is made of plastic. This is false. We’d like to assure all our shoppers that our rice is 100% safe for consumption, and have passed stringent safety checks by the authorities. We would like to advise the public not to further circulate this malicious rumour. Thank you!” 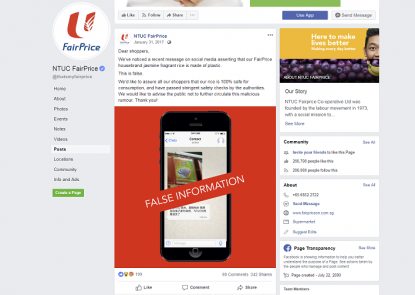 A screenshot of the statement on FairPrice's official Facebook page

As of April 2019, The rice was still available in FairPrice’s online store here.

In this Facebook post on November 1, 2017, the Singapore Food Agency stated it had “not detected fake rice in Singapore thus far”.

The statement said in part: “Imported rice is regularly inspected and sampled to ensure it complies with our food safety standards and requirements. Our sampling tests include authenticity, and testing for mycotoxins, pesticide residues and heavy metals.”