No, the Reserve Bank of India Governor has not publicly blamed Prime Minister Narendra Modi for his recent resignation

Multiple Facebook posts share a photo of the Governor of the Reserve Bank of India, Urjit Patel, and claim he called Narendra Modi “the most useless prime minister” and blamed pressure from the Modi administration for his December 10, 2018 resignation. Patel cited personal reasons for his departure and has not spoken publicly or issued any statements since his official resignation letter was published.

The Facebook posts, for example this one which has been shared more than 2,500 times, appeared on social media after Patel announced his resignation December 10. 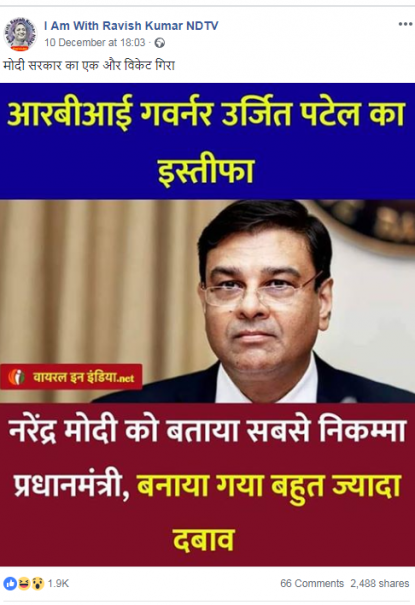 The text on the photograph of Patel says in Hindi: “The governor of the Reserve Bank of India resigns. He called Narendra Modi the most useless prime minister and said he was pressured into handing in his resignation.”

The caption of the Facebook posts says: “Another wicket falls for the Modi government…”

Here is an AFP report on Patel’s resignation, which says he stood down following months of tension with the Modi government.

But in his official resignation letter, Patel cited personal reasons for his resignation.

The letter does not mention Modi or his administration. Here is the full text of the letter:

"On account of personal reasons, I have decided to step down from my current position effective immediately. It has been my privilege and honour to serve in the Reserve Bank of India in various capacities over the years. The support and hard work of RBI staff, officers and management has been the proximate driver of the Bank’s considerable accomplishments in recent years. I take this opportunity to express gratitude to my colleagues and Directors of the RBI Central Board, and wish them all the best for the future."

Since his resignation, Patel has not spoken to media or made any public statements about the reasons for his departure.

The resignation has been a major story for Indian media.

The Hindustan Times, one of the biggest English language newspapers in India, has reported extensively on Patel’s resignation and subsequent events.

Here are all the articles in Hindustan Times that mention Patel’s resignation, showing that his only public comments on the resignation were contained in the original letter.

Dainik Jagran, a widely read Hindi language daily, has also reported extensively on Urjit Patel’s resignation. A search of their coverage demonstrates that Patel has not spoken publicly since he issued his resignation letter citing personal reasons on 11 December, 2018.