No, President Muhammad Buhari did not say, 'One in every five Nigerian is mad'

A claim widely shared on Facebook and Twitter alleges that in a speech at a recent meeting of world leaders in Paris, Nigerian President Muhammadu Buhari stated that “One in every five Nigerian is mad”. This claim is false. A text search of a transcript of his speech finds the president did not mention mental health at the Paris Peace Forum. His speech focused on illicit financial flows and corruption.

A video containing the majority of Buhari’s speech was also posted on YouTube.

The president's spokesman, Garba Shehu, also confirmed to AFP in a phone call that Buhari had not mentioned mental health during the forum in Paris.

At 8:52am on November 14, a tweet by Ibu Thomas, an “activist” and “commentator”, claimed that Buhari had made the statement in France. The tweet has been retweeted more than 1000 times.

In the tweet, he tagged a number of profiles, including those belonging to opposition political figures such as Femi Fani Kayode, an ex-government minister and spokesman for former president Goodluck Jonathan's re-election campaign in 2015. 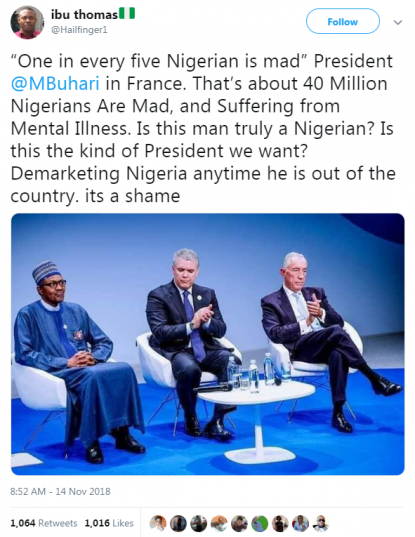 A screenshot taken November 16, 2018 of a tweet by Ibu Thomas

On his Facebook page later that morning, Kayode posted the claim, and it was shared more than 600 times.

The false claims have been shared widely on Facebook, Twitter and WhatsApp, as well as on numerous websites.

On November 12, the Permanent Secretary at the Ministry of Health, Abdulaziz Mashi Abdullahi, said, “In Nigeria, an estimated 20 percent to 30 percent of our populations are believed to suffer from mental disorders.”

He said this was a significant proportion of Nigeria’s estimated 200 million people.

The false claims appear to be a misattribution of the minister’s statements, to President Buhari. The claims also disparage mental health illness by describing them as "mad".