No, the polio vaccine did not infect millions of Americans with cancer

An article which claims that 98 million Americans were given cancer by the polio shot has been shared hundreds of thousands of times since 2015 and recently resurfaced in Canadian and Asian Facebook groups. The claim is based on the contamination of some polio vaccines with the SV40 virus in the 1950s, but it is false. The current consensus in the scientific community is that there is no correlation between the SV40 virus and cancer in humans.

“CDC admits 98 million Americans were given cancer virus via the polio shot,” announces a headline on vaccine.news, a website dedicated to questioning vaccination efforts worldwide. The article is based on a supposedly now-censored “grand admission” from the Center for Disease Control (CDC), the American government agency that oversees vaccines.

The article was also shared in French, Spanish, and Portuguese. 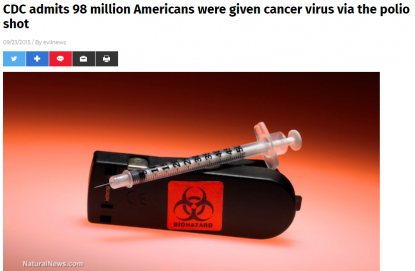 Screenshot taken on February 18, 2019 of a false article from vaccine.news

In 2013, the CDC published a facts sheet about the SV40 virus and the contamination of the first polio vaccines administered in the 1950s. “The CDC quickly took down the page, along with Google,” the vaccine.news article claims, but the web page was saved in an internet archive and is still available today.

Further, there is no evidence that the CDC is trying to censor information connected to the contamination of the first polio shots. Official government websites explain the details and implications of the contamination episode here, here, and here.

Kristen Nordlund, a spokesperson for the CDC told AFP by email, "every few years and as website technology changes we redesign CDC’s website." She added that the archived page was "multiple versions ago of the website."

The vaccine.news article was recently shared in Canada and in Asia via Facebook groups with thousands of members, even though the SV40 virus has not been in polio vaccines since 1963.

The first polio vaccines were developed in the 1950s by American scientists Jonas Salk and Albert Sabin. The strains of viruses used in their vaccines were cultivated in monkey kidney cells, a normal part of the vaccine making process at the time.

It was later discovered that some of the green monkey kidney cells had been contaminated by a simian virus, SV40. The virus affected an estimated 10-30% of vaccines between 1955 and 1963. Around 98 million people had received the polio vaccine in those years, and therefore only between 10 and 30 million people were concerned.

Eric Engels, Chief of the Infections and Immunoepidemiology Branch of the National Cancer Institute, took part in one of the studies mentioned above. He told AFP that “The field has largely concluded that SV40 is not a cause of human cancer, and that is my belief as well.”

He added that in the case of studies that detected the SV40 virus in human tumors, “the consensus is now that those reports were false positive results.”

According to the Canadian Public Health Association (CPHA), polio peaked in Canada in 1953 with nearly 9,000 cases and 500 deaths. Through vaccination, CPHA said Canada was declared “polio free” in 1994. The list of polio vaccines authorized in Canada and their ingredients are available on the Canadian government’s website.