No, this photo shows a piece of performance art created by a Chinese artist in 2000

A photo has been shared hundreds of times in multiple posts on Facebook alongside a claim it shows a Chinese man preparing a dead baby for consumption. The posts also claim cannibalism in China has caused the outbreak of a new strain of the novel coronavirus. This claim is false; the photo shows a performance by Chinese artist Zhu Yu in 2000 which he titled “Eating People”; the same performance has previously been used in hoax reports of cannibalism in China.

The photo was published here on Facebook on January 28, 2020. It has been shared more than 300 times. The post’s Tagalog-language caption translates to English as: "THAT'S WHY THE DISEASE CORONAVIRUS EMERGED IN CHINA BECAUSE THEY MADE DISHES OUT OF BABIES BECAUSE IT SUPPOSEDLY MAKES SKIN FAIRER. WHAT HAPPENED TO THIS COUNTRY ALLOWED TO EAT HUMAN FLESH ?!”

A new coronavirus epidemic, now declared a global health emergency by the World Health Organization after spreading to more than 24 countries, has killed at more than 630 people and infected at least 31,000 others in China, according to this AFP report dated February 7, 2020.

The same photo was also shared on Facebook here and here, alongside a claim that it shows cannibalistic practices in China.

The claim is false; the photo shows a 2000 performance art titled “Eating People” by the Chinese artist Zhu Yu, widely known for his controversial artwork.

A combination of reverse image and keyword searches found this 2005 report published by the Massachusetts Institute of Technology (MIT) Press on the controversy around Zhu’s work, which contains a black-and-white version of the same photo.

Below is a screenshot of the photo, highlighted in red by AFP, found on page 66 of the report: 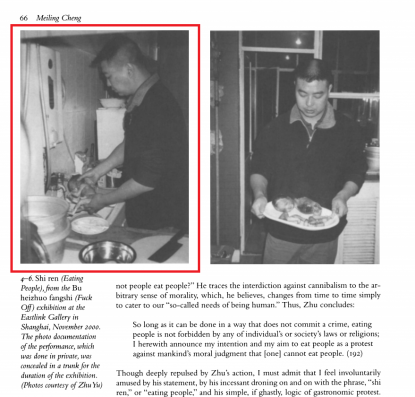 A screenshot of the photo in the journal

The report states, in part: “The image originally came from a series of photographic documents from an art action entitled, Shi ren (Eating People), carried out by Beijing artist Zhu Yu as a piece of his xinguwei yishu (behavior art) - which is the Chinese translation for performance art or live art. Zhu produced Eating People for an exhibition called Bu heizhuo fangshi (Fuck Off), which took place at the Eastlink Gallery in Shanghai in November 2000.”

Below is a screenshot comparison of the photo in the misleading Facebook post (L) and the photo from the MIT Press report (R): In a 2003 documentary titled “Beijing Swings”, it is said that “Zhu Yu has recently come out to reveal that [the performance] was all faked.”

Regardless, photos of Zhu’s work have been used in multiple hoax reports of purported cannibalism in China since at least 2001.

In this article dated June 2001, Snopes debunked claims that the photos showed human fetuses for sale at a restaurant in Taiwan.

In August 2019, AFP Fact Check also debunked multiple French posts in which Zhu’s photos were used in false claims that China had legalised the consumption of aborted fetal tissue.