No, this photo does not show street violence in Brazil, England or the United States

A photo depicting a white man assaulted by a black man has been repeatedly used out of context in online articles and social media posts. A reverse image search shows it was taken in November 2009 in Paris. A witness to the scene and AFP reporting from the time show that the man in the photo who was assaulted was a journalist trying to film clashes after a cash give-away was cancelled.

Used to illustrate "Rampant Muslim violence" in Marseille, "Christian persecution" in England and "Black on White Mob Violence," in the United States, the photo below has been reused across the internet for the past nine years and was decontextualized in many languages.

The image shows a black man about to kick a white man in the face, while a crowd that includes several black men looks on. Most recently, it was shared on Facebook in Brazil with a caption suggesting the individual is a white woman subjected to racial violence. 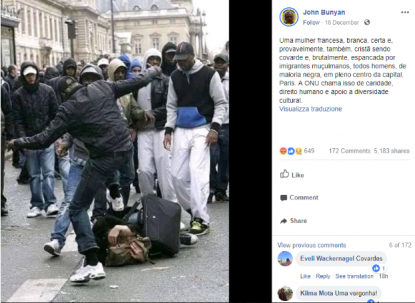 AFP traced the original photo and other shots of the same scene to photographer Lucas Dolega. Dolega was killed two years later by Tunisian police while covering the 2011 protests in the North African country, and so could not be contacted about this photo. 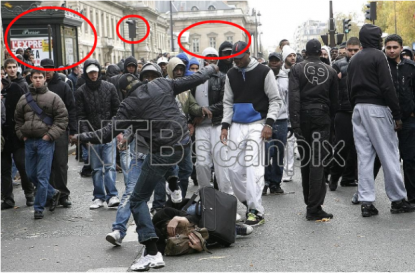 The original photo was taken on November 14, 2009, on Motte-Piquet Avenue, in Paris’ seventh district, near the Eiffel Tower. From left to right in the screenshot below, the press kiosk, the traffic light and the three windows of the building in the background (the Ecole Militaire), all match the original photo. 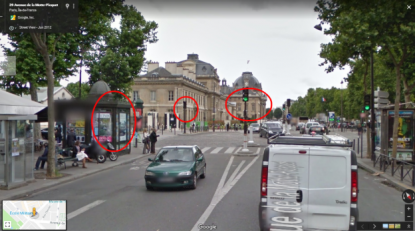 Far from some sort of race riot, the photo depicts clashes that occured in Paris in 2009 because of a cancelled publicity stunt.

According to AFP reporting from the time, on November 14, 2009, several thousand people gathered near the Eiffel Tower after Belgian internet company Rentabiliweb announced it would hand out of “roughly 40,000 euros” in cash in “about 4,000” envelopes.

At around 11am, the organizers decided to call off the event after the first signs that the larger-than-expected crowd was getting out of control.

French photographer Olivier Coret, who was present at the scene, told AFP that the cancellation resulted in groups of young people throwing projectiles at police and attacking a photographer and a cameraman.

Coret said he believes that the photographer was left without significant injuries because other members of the same group de-escalated the situation. 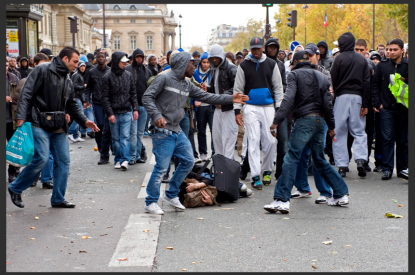 Coret took the photo below, which shows another journalist who was attacked for filming the scene. 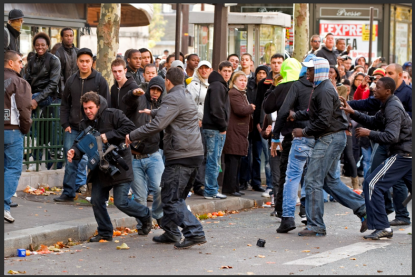 According to AFP reporting from the time, nine people were arrested on that day, and one vehicle was vandalized by the disappointed crowd.