No, Nigeria’s First Lady has not told Nigerians to vote against President Buhari

Viral posts online claim that Nigeria’s First Lady has said that Nigerians should not vote for her husband, President Muhammadu Buhari, in elections in February 2019. Aisha Buhari allegedly said “anyone who votes for my husband is a fool.” There is no record of Aisha Buhari making that statement.

An article published on the website Exclusive103.com in October included a quotation in the headline allegedly from Aisha Buhari saying: “If you vote for my husband again, you are a fool, vote him out.” The article has been shared more than 22,000 times on Facebook and more than 300 times on Twitter. 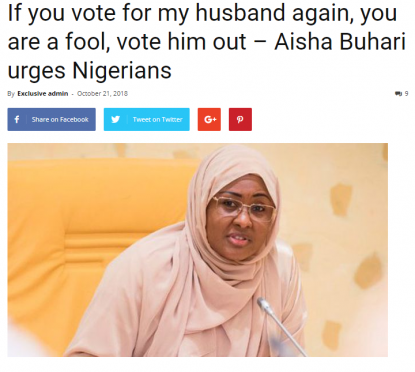 (A screenshot taken November 18 of an article published on Exclusive103.com claiming that Aisha Buhari had stated that anyone who votes for her husband, President Buhari is a fool.)

The article included tweets copied from a Twitter thread on Aisha Buhari’s verified Twitter account, on October 7, where she was critical of the ruling All Progressives Congress party (APC), but not her husband specifically.

It is disheartening to note that some aspirants used their hard earned money to purchase nomination forms, got screened, cleared and campaigned vigorously yet found their names omitted on Election Day, these forms were bought at exorbitant prices.

Aisha Buhari's tweets followed APC primaries across Nigeria ahead of presidential, gubernatorial and legislative elections in February 2019. But they did not include the quotation attributed to her in the Exclusive103.com article.

Aisha Buhari's spokesperson, Suleiman Haruna, also said she had not made that statement.

Aisha Buhari has, however, been an outspoken critic of her husband's party and government.

In October 2016, in an interview with the BBC, she claimed that President Buhari’s government had been hijacked by a “few people”. She said: “The president does not know 45 out of 50 of the people he appointed and I don't know them either, despite being his wife of 27 years.”

After her comments, President Buhari, at a press conference with Angela Merkel the following day, controversially said: “I don't know which party my wife belongs to, but she belongs to my kitchen and my living room and the other room.”

Aisha Buhari has remained a vocal critic, but other widely shared articles have since carried false quotations criticising her husband.

An article published on December 2, 2018, by Ecocitytvnews.com.ng quoted Aisha Buhari in a headline saying, “I will pack out of Aso Rock, that man is not my husband.” There is no record of Aisha Buhari having made that statement and her spokesperson denied that she said that. 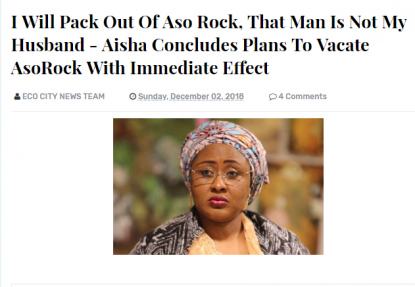 (A screenshot taken on 18 December 2018, of an article published on Ecocitytvnews.com.ng claiming Aisha Buhari had threatened to leave the Presidency State House.)

The article has been shared more than 3,000 times on Facebook.

The article also claimed Aisha Buhari was banned by her husband from campaigning ahead of the elections next February but she has continued to campaign. She appeared at an event on December 12 sponsored by the Buhari Support Organisation at the Presidential State House, Aso Rock.