No, this photo does not show rubbish left by environmentalists in Queensland, Australia

A photo of a park strewn with plastic bags, bottles and other rubbish has been shared thousands of times on Facebook alongside a caption accusing environmentalists of littering in a town in Queensland, Australia. The claim is false; the photo shows London’s Hyde Park.

The photo is contained in this Facebook post, which has been shared more than 10,000 times since it was uploaded on April 28, 2019.

Its caption reads: “This is what the hypocritical Greeny environmentalist leave behind after their convoy to Clermont. Send Bob the cleanup bill.” 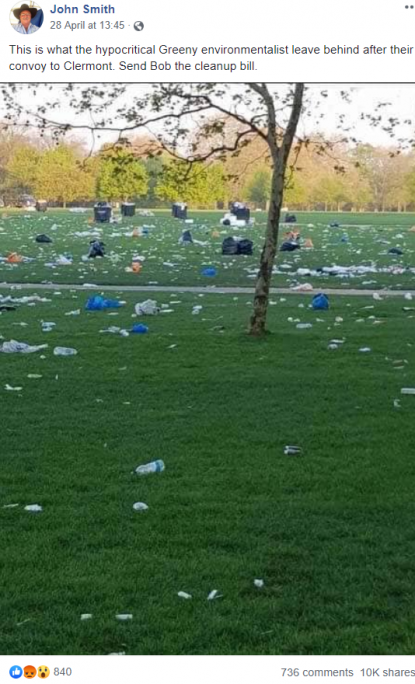 A man called Bob Brown was interviewed in Clermont, a coal-mining town in the northeastern Australian state of Queensland, on April 28 by national broadcaster ABC.

In the ABC report here, Brown is described as the leader of a group of protesters who oppose a major coal mine project backed by mining giant Adani.

Here is an AFP report about the mine proposal published on April 9, 2019.

The claim is false; the photo actually shows Hyde Park in the UK's capital London.

Reverse image searches on Google led to this April 23, 2019, tweet from the verified account of Royal Parks, a charity that manages eight parks in London.

There's a lot of incorrect information doing the Twitter rounds this morning. This photo is the result of an unofficial event in Hyde Park on Saturday, not the #ExtinctionRebellion protestors in Marble Arch.

It costs us millions to clear #litter every year. Please take it home. pic.twitter.com/F1JtAqmnVO

The caption of the tweet states in part: “This photo is the result of an unofficial event in Hyde Park on Saturday, not the #ExtinctionRebellion protesters [sic] in Marble Arch.”

The same photo has also been circulating since April in multiple online posts that say it shows Hyde Park, such as here on Facebook, here and here on Twitter and here on Instagram. It is also included in several Reddit posts, for example here and here.

The Saturday prior to April 23 was April 20, when a climate protest organised by environmental activist group Extinction Rebellion took place near Marble Arch, which is located next to Hyde Park, as seen on Google Maps here.

This BBC report from the same day says 750 people were arrested in the event. AFP also covered the protests here.

Hyde Park deep in rubbish left by yesterday’s pro-cannabis protesters, many of whom came from the #ExtinctionRebellionLondon. Interesting way of showing your care for the planet. Park workers now spending Easter Sunday cleaning up their mess say it’s the worst they’ve ever seen. pic.twitter.com/She7IkNWdu

Due to a lack of signs and other landmarks, it is difficult to pinpoint exactly where in Hyde Park the photo in the misleading post was taken. But the distinctive paths and open space with clusters of trees behind can be seen in Google Maps imagery from the park.

The image below compares the misleading photo (far left) with screenshots from Google Maps showing Hyde Park from other angles: 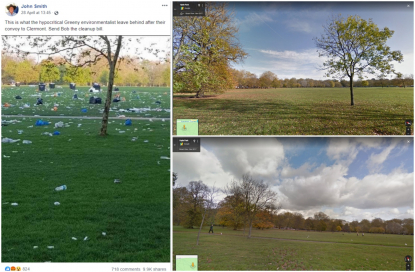