No, this photo does not show Muslims at Australia's Bondi beach requesting a bikini ban

A photo circulating on Facebook, blog posts and online forums purports to show Muslims at Australia’s Bondi beach holding a sign requesting a bikini ban during Ramadan. The image has been used out of context; it shows two men holding a sign on a beach in Morocco.

The image with the false claims about it being taken at Bondi beach has been shared more than 2,000 times since being uploaded to this Facebook post on April 22, 2019.

Below is a screenshot of the post, which AFP has covered with a screen because it contains another image featuring nudity: 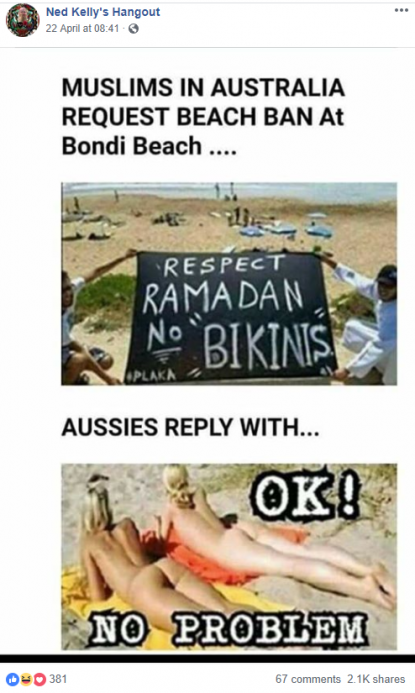 The top photo in the misleading Facebook post shows two men on a beach, holding a sign that reads: “Respect Ramadan. No Bikinis”. A caption alongside it says: “Muslims in Australia request beach ban at Bondi Beach”.

The bottom photo shows two naked women on a beach alongside a caption that states: “Aussies reply with ‘Ok! No problem”.

AFP tracked the images with the same false claim about Bondi beach appearing on various other platforms from 2017, including on blogs here, here and here.

The claims are false; the men in the top image were holding a sign on a beach in the coastal Moroccan city of Agadir.

A reverse image search on Google led to this report by Morocco World News published on June 20, 2015. The report states, in part: “A group of young Moroccan surfers launched a campaign with a view to prevent foreign tourists on a beach in Agadir from wearing bikinis during the holy month of Ramadan”.

Other media reported on the original incident in 2015, including the Al Arabiya website here. It showed the same image and credited it to the Morocco World News.

A report here by French-language Moroccan news site Le360, which was dated June 23, 2015, showed another image of the same sign. Its report said authorities had removed the sign.

No, this is not a photo of a senior BJP politician after he voted for the opposition in India's 2019 elections

No, the Philippine disaster management agency did not issue an alert for an ‘8+ magnitude’ quake