No, this photo does not show a member of India's Congress party saying the country will be ruled by Muslims

A post that has been shared hundreds of times on Facebook claims to show an image of a member of India's Congress party saying the country will be ruled by Muslims. The claim is false: the image is from a 2014 lecture by a US-based Imam that makes no reference to India or the Congress party.

The post on March 17, 2019, has the Congress party’s logo embedded in an image of a bearded man with a skull cap, above text that says India will be ruled by Muslims and attributes the comments to the “Muslim Alliance - Congress”. 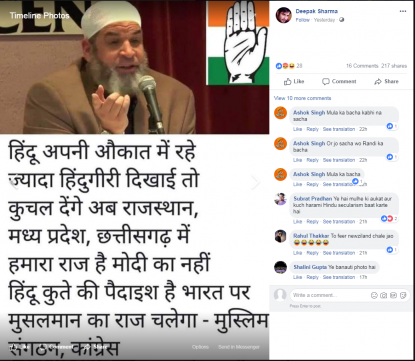 Here is a translation of the Hindi language text beneath the image:

“Hindus should know their place. If they are too overt in their Hinduism, we will crush them. Now, in Rajasthan, Madhya Pradesh, Chhattisgarh, we rule and not Modi. Hindus and dogs have the same origins. India will be ruled by Muslims - Muslim alliance, Congress.”

The post comes ahead of general elections in India starting on April 11, which will see Prime Minister Narendra Modi and his Hindu nationalist Bharatiya Janata Party (BJP) seek a second term.

Here is an AFP report on the announcement of elections.

Rajasthan, Madhya Pradesh and Chhattisgarh are Indian states won by Congress in state elections in December 2018.

Here is an AFP report following the December state elections.

The image above the text has the Congress logo of an open hand against the colours of the Indian flag in the top right corner.

AFP conducted a reverse Google search of the image of the man in the misleading post and found a link to this video.

The video is dated August 30, 2014, and according to the caption, is taken from a lecture on whether Muslim men can marry non-Muslim women by Karim Abu Zaid, the Imam of the Colorado Muslims Community Center Aurora, Colorado in the US.

There is no mention of Hindus or India in the video.

The channel hosting the video is named Bakorah.

AFP has circled where the Congress symbol has been imposed over the Bakorah symbol in the top right hand corner. 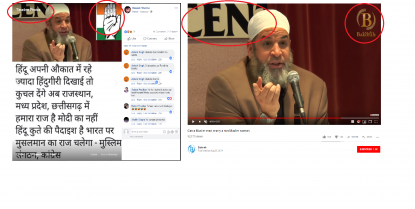 Here is a link to the official Congress website. There is no mention of a “Muslim Alliance.”