No, this photo does not show a man who infected Cadbury products with HIV

Multiple posts shared on Facebook in the Philippines and across social media worldwide claim to show a man who contaminated Cadbury products with his own HIV-infected blood. The claim is false; the man pictured in the post is Sadiq Ogwuche, arrested in 2014 for his role in organising a bombing in Nigeria earlier that year. He has no connection to Cadbury; HIV cannot be transmitted via food or beverages.

An image that contains text and two pictures – one of a man flanked by people wearing Interpol shirts and another of Cadbury chocolate bars – has been shared repeatedly online, for example in this post by a Filipino Facebook user.

Cadbury is a British chocolate brand; here is its website. Interpol is the International Criminal Police Organization; here is its site. 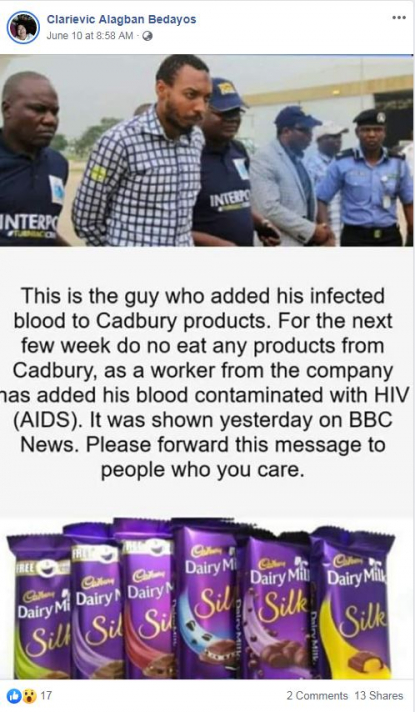 The text in the image says: “This is the guy who added his infected blood to Cadbury products. For the next few week do no eat any products from Cadbury, as a worker from the company has added his blood contaminated with HIV (AIDS). It was shown yesterday on BBC News. Please forward this message to people who you care”.

Here is a US government health information page about both HIV and AIDS.

The page has no exact date but says it was published “4 years ago”. Below is a screenshot of the photo as it appears on Sahara Reporters: 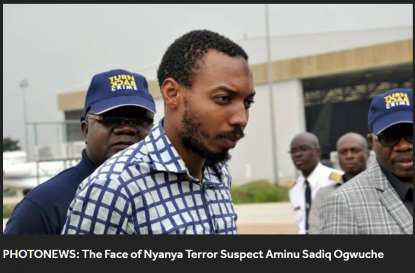 The report is titled: “The Face of Nyanya Terror Suspect Aminu Sadiq Ogwuche”.

AFP wrote about Ogwuche, a suspected co-mastermind of the bombing of a bus station in Abuja in April 2014, and his extradition to Nigeria from Sudan in this report dated July 16, 2014.

A search of AFP’s images led to other photos of Ogwuche here and here. Both are credited to the Nigerian National Information Centre.

Below is one of the AFP photos of Ogwuche: 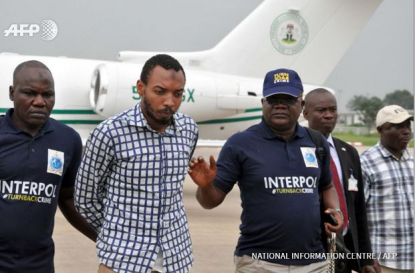 The misleading photo and the photos taken by AFP contain these same key details: a man in checkered shirt standing between two men whose shirts say “INTERPOL” and “#TURNBACKCRIME”.

This search on the BBC News website for “Cadbury HIV” returned no results. Below is a screenshot of that search:

The US Centers for Disease Control and Prevention (CDC) says here that HIV cannot be transmitted by eating food even it if contains small amounts of HIV-infected blood or semen.

It says: “You can’t get HIV from consuming food handled by someone with HIV. Even if the food contained small amounts of HIV-infected blood or semen, exposure to the air, heat from cooking, and stomach acid would destroy the virus”.

“Though it is very rare, HIV can be spread by eating food that has been pre-chewed by someone with HIV. The contamination occurs when infected blood from a caregiver’s mouth mixes with food while chewing. The only known cases are among infants”.

The misleading image has also been shared elsewhere online, for example here and here.