No, this photo does not show the crowd at an election rally held by Indonesian President Widodo

A photo of a massive crowd of people has been shared in Facebook posts that claim it shows participants in an election rally held by Indonesian President Joko Widodo. The claim is false; the photo actually shows a rally held in Turkey in June 2018 and was taken by international news agency Reuters.

This Facebook post, shared dozens of times since it was published April 8, 2019, contains a photo showing a sea of people, many of them wearing red clothes, standing in a huge field. A big stage can also be seen to the left of the image.

The post claims that the photo is of a rally in the western Indonesian city of Batam organised by Widodo, who is running for re-election in national polls on April 17. Here is the president’s official Twitter account.

Translated to English, the post’s Indonesian-language caption says: “The campaign of Jokowi in Batam was lively… awesome,” referring to Widodo by his nickname Jokowi. 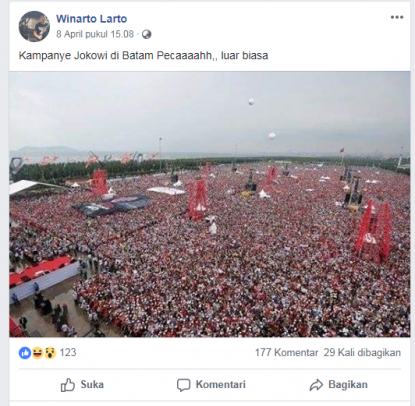 A reverse image search on Google reveals the photo was not taken at an Indonesian election rally. It actually shows an election rally in Turkey held on June 23, 2018, by a presidential candidate named Muharrem Ince from the opposition Republican People’s Party (CHP).

The photo was published by Reuters in this report on the day the rally took place.

An AFP photographer was also at the rally in Istanbul and took similar photos of the same crowd, for example this one.

Below is the AFP image, in which the same red-adorned metal structures, white balloons and trees in the background can be seen: 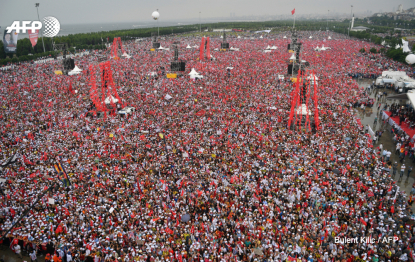 When the image is examined more closely, people in the crowd can be seen waving Turkish flags and there is a poster for Ince in the top left-hand corner.

These details are clearly visible in the two zoomed-in sections of the AFP photo featured in the image below: Widodo did hold a campaign rally in Batam on April 6, 2019. Here is a report by Indonesian news outlet Detik which includes several photos of the event.

The president’s supporters are waving red and white flags, but no red metal structures are visible and there is a podium that does not appear in the Reuters or AFP images.

Below is a screenshot of the Detik report: 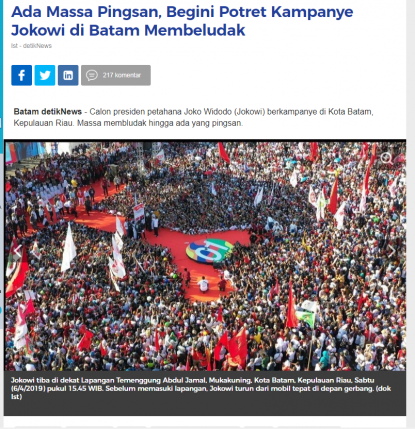