A photo has been shared thousands of times in multiple posts on Facebook and Twitter which claim it shows 26 corrupt government officials who were sentenced to death in China. The claim is misleading; the photo is actually a 2004 AFP image of a sentencing rally in the east Chinese city of Wenzhou after which 11 people were executed; none of those executed were corrupt officials, according to Chinese-language media reports at the time. 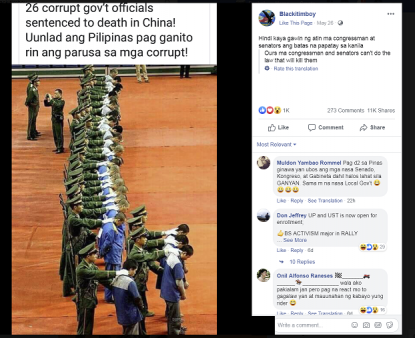 The Tagalog language caption translates to English as: “Our congressmen and senators could not make the law that will kill them”.

The Tagalog text on the photo translates to English as: “26 corrupt gov't officials sentenced to death in China! The Philippines will thrive if this is also the punishment for the corrupt!”

The Philippines abolished the death penalty in 2006. This government act published on June 24, 2006 includes details of the law.

In 2017, the Philippines’ House of Representatives passed this bill seeking the restoration of death penalty in the country. It was subsequently transmitted to the Senate, where it remains pending.

The same photo was also shared on Facebook here and on Twitter here with a similar claim.

The claim is misleading; the photo is an AFP image from 2004 and shows a group of convicts at a sentencing rally in China.

A reverse image search on Google found the photo here on the AFP Forum.

The same photo was also published here on Getty Images, with a credit to AFP.

Below is a screenshot of the photo on the AFP Forum: 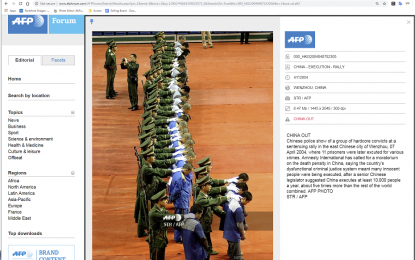 A screenshot of an AFP photo of the sentencing rally

The caption states: “Chinese police show of a group of hardcore convicts at a sentencing rally in the east Chinese city of Wenzhou, 07 April 2004, where 11 prisoners were later executed for various crimes. Amnesty International has called for a moratorium on the death penalty in China, saying the country's dysfunctional criminal justice system meant many innocent people were being executed, after a senior Chinese legislator suggested China executes at least 10,000 people a year, about five times more than the rest of the world combined”.

A keyword search for the execution of 11 Chinese hardcore convicts on April 7, 2004, found this article published on Chinese news site Zhejiang Online on April 8, 2004.

The Mandarin language report translates to English in part as: “At 9 o'clock in the morning, the Wenzhou Intermediate People's Court held a public sentencing rally in the Wenzhou Gymnasium. Chen Yongfeng, the murderer who caused bad influence in Wenzhou by killing 10 people, was sentenced to death and deprived of political rights for life. Chen Yongfeng and 10 other criminals were executed after the rally.”

This article posted on Sina.com, a Chinese online media company, on April 7, 2004, also reports on the same execution and includes photos showing some of the same prisoners.

The Mandarin language report translates to English in part as: “The 11 criminals including Chen Yongfeng and Zhao Airong were dissatisfied with the first instance judgment and appealed to the Zhejiang Higher People's Court. The court later rejected the appeals, upheld the original judgment, and approved their execution and deprivation of political rights.

“Other criminals (apart from Chen and Zhao) also taken to the execution ground were involved in crimes such as robbery, intentional homicide, intentional injury and forced prostitution.”

The misleading post was shared mostly by Facebook groups which support Philippine President Rodrigo Duterte and the Marcos political clan, according to data from Crowdtangle.

Below is a screenshot of the data: 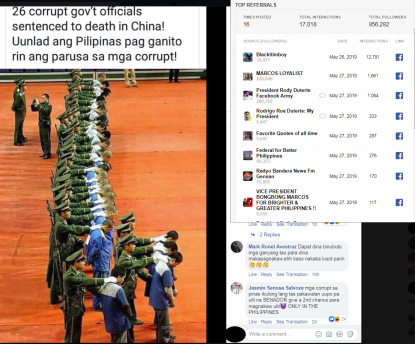 A screenshot of the data on Crowdtangle