No, Pharrell Williams and Blade Nzimande are not the same age 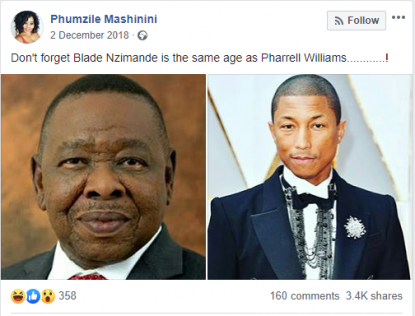 In the archived post, photographs of both men are accompanied by one line of text saying, “Don’t forget, Blade Nzimande is the same age as Pharrell Williams …!”.

Nzimande is seen on the left. The post was published in December 2018 and so far has accumulated 160 comments and 3,400 shares. An almost identical post the day after received fewer shares but a similar range of comments, from genuine surprise on the one hand to light-hearted banter on the other.

Nzimande is the older of the two. He was born on 14 April, 1958 in Pietermaritzburg, KwaZulu-Natal province, South Africa.

This was confirmed by his spokesperson Ishmael Mnisi in an email to AFP. These websites here, here and here list the same date of birth for Nzimande. The South African Communist Party (SACP) marked his 61st birthday earlier this year with good wishes in this Facebook post. 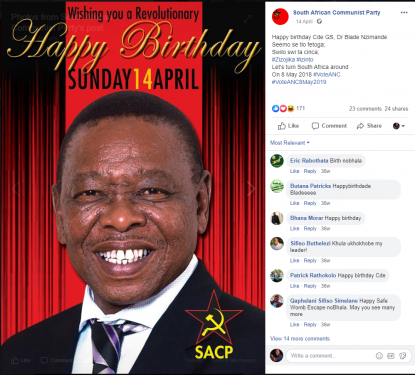 Nzimande was a figurehead in the struggle against apartheid. After South Africa’s first democratic elections in 1994, he went on to serve in several cabinets as an ANC member in his capacity as general secretary of the SACP. He is currently minister of higher education and training.

Williams, who has earned superstar status in the music and fashion worlds, is 15 years younger. Several online references, for example here and here, cite his birthplace as Virgina, United States and his birthdate as 5 April, 1973.

The best proof of the music star’s birthday can be found on his official Facebook page. 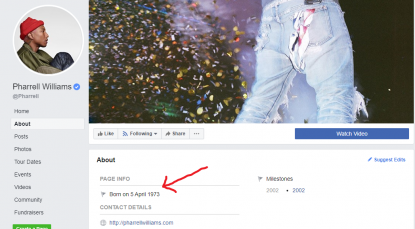 The original post resurfaced earlier this month, a full year on, with the same pictures but slightly modified text, reading: “Don’t forget, Blade Nzimande is the same age as Pharrell Williams. Drink responsibly this festives.” (sic)

A screenshot of a similar post, just a year later, making the same claim, with a slight modification

The page, self-labelled as “Just for Fun” and called Reactions Only, was created in May this year and has more than 36,000 followers. The post itself had only 22 shares.

A day later another similar post had even fewer shares.

Fact checking editor for southern Africa
All posts
Next post

This video has circulated online since at least 2017 and shows a police drill in Jharkhand, India