No, this is not a video showing a Lion Air plane about to crash in Indonesia

A video posted on multiple social media sites claims to show a Lion Air plane seconds before it crashed in waters off Indonesia’s Java Island. The footage is of an earlier Lion Air flight landing safely at an airport thousands of kilometres away.

Lion Air flight JT 610 crashed shortly after taking off from Jakarta on October 29, killing all 189 people on board.

The misleading video was shared repeatedly over the next few days in several Facebook posts, and it has been viewed more than 5,000 times, according to an AFP tally.

One of the posts, which has been watched more than 2,000 times, has a caption that says: “Amateur video showing seconds before the LION AIR JT-610 crashed in Karawang waters.” 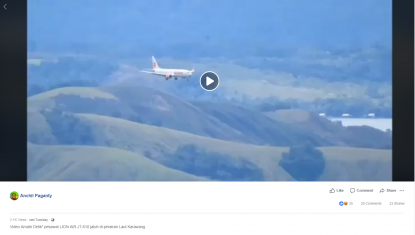 Snapshot of the misleading video.

The video does not show a plane crashing into sea.

The original clip was published on January 26, 2018 and shows a Lion Air plane landing at Sentani airport in Jayapura on Papua island, Indonesia’s easternmost region.

Airbus vs Boeing, a Facebook page about aviation issues, posted the same video on March 15, 2018, and said it was a video of a Lion Air flight landing at Sentani airport, which is situated next to a lake with the same name.

He said he had filmed the video himself.

“Yes the video is mine,” La Madi, who lives in Sorong in Papua, said in an email.

La Madi said he had also uploaded several clips of plane landings at Sentani Airport on his YouTube page, such as this clip on a Garuda Indonesia plane arriving at the region’s largest airport.