No, this is not a video of Pakistani air force skydivers

A video has been viewed hundreds of thousands of times on Facebook in posts that claim it shows Pakistan air force skydivers performing aerial stunts. The footage is actually from California in 2015, when more than 200 skydivers set a new world record.

The video has been repeatedly posted on social media, including here where it has been viewed around 246,000 times since it was published by a Pakistani Facebook page on March 23, 2019.

The post has a caption in Urdu which translates as: "Enthralling demonstration by Pakistan Air Force on the occasion of Pakistan Day. Like the page."

A patriotic Pakistani song plays in the background of the clip.

The video has also been shared by multiple other Facebook users, for example here and here – viewed around 235,000 times since it was published March 24, 2019 – and on YouTube here.

Below is a screenshot of one of the false posts: 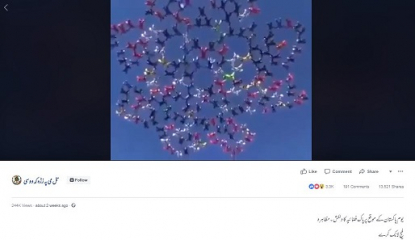 The first part of the footage is filmed in one continuous shot. But at the timestamp 1.35 it changes to a different, blurrier shot of a lone skydiver holding a Pakistani flag.

Below is a screenshot of that skydiver in the video: 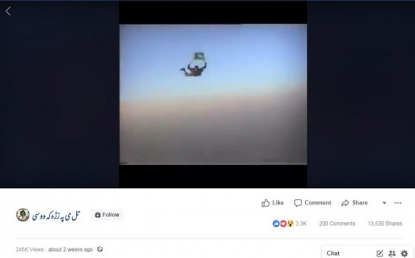 The footage in the first part of the video is actually from September 2015, when 202 skydivers from nearly 30 different countries set a new record above Southern California.

The jumpers grabbed each other’s arms and legs to create a giant lattice-like configuration at around 7,000 feet (2,100 metres).

Here is footage of the original event on on the YouTube account of a southern California news outlet called the The Press-Enterprise – embedded below – and an online report.

The skydivers are wearing the same clothes as in the false Facebook post and the ground underneath them is also the same – with a distinctive pattern of roads, fields, and mountains clearly identifiable in both.

The image below compares a screenshot from the Press Enterprise footage (L) with a screenshot of the false Facebook post (R).

The same distinctive corner of a field has been circled by AFP:

Side by side comparison of a screenshot from the Press Enterprise footage (L) with a screenshot of the false Facebook post (R). The same distinctive corner of a field has been circled by AFP

Footage of the California event was also uploaded to video platform Vimeo here in 2015.

The image below compares screenshots from the Vimeo footage (L) with the footage used in the misleading Facebook post (R):

The same video with a similar claim had also emerged in India, for example here, where it has been shared more than 300,000 times and viewed 11 million times in about one year since it was published by a Hindi-language Facebook page.

AFP’s fact-check report on the Indian social media claims about the video can be read here.