No, this is not a video of journalists staging migrants drowning

A video, now viral in many countries, purports to show a television crew staging migrants drowning on a beach in Crete. AFP found two members of the incriminated crew: they were actually shooting a documentary on the 1922 Greek exodus from Asia Minor.

"Poor migrants! And that is exactly how it works, what they are playing at us on TV! Is this a scam? The director is shooting a scene of 'the migrants drown in the sea!'," a man's voice narrates in Czech over the video.

Screenshot of the video accusing a tv crew of propaganda (DR)

At first glance, the video, about one minute and seventeen seconds long, is puzzling. It shows a group of about ten people in water next to a beach. Most are women. All of them are dressed and veiled, and two of them are carrying large red and white bundles. As the group slowly advances into the sea, five individuals begin to float on the water's surface, motionless. 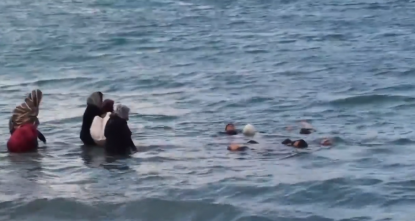 These images were shot in late July at a beach in Ierapetra, in Crete (see "Verification process" at the bottom of the article). They become all the more interesting when the man behind the camera rotates his lense towards the beach twice, and zooms in on a group of three people standing around a camera on a tripod which is aimed at the sea.

This group's presence near the camera might suggest that they are either a camera crew or journalists. 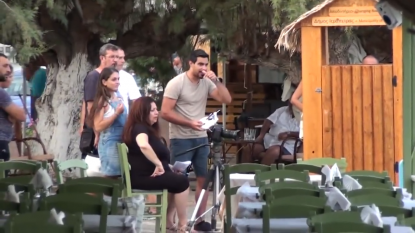 Since July 31, dozens of websites, Facebook pages, and Twitter accounts have published and propagated these images, each time stating or insinuating that the video depicts journalists engaged in propaganda work.

"Pictures and clips of migrants have been shared widely to manipulate public opinion and generate sympathy. This is one of the first times such a piece of fake footage has been captured by a member of the public as it was happening," according to one post by "The Voice of Europe" shared 1,500 times. 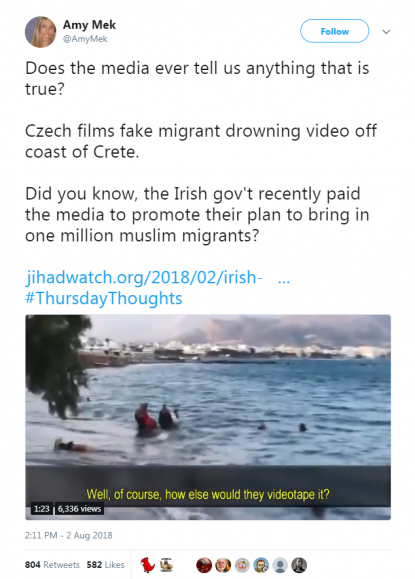 "Does the media ever tell us anything that is true?", one flustered Twitter user wrote.

According to AFP's calculations, the video has accumulated 1.2 million views across YouTube, Facebook, and Twitter. It was shared tens of thousands of times, first in the Czech Republic, but then through Western Europe and in North America.

The Czech Facebook page AntiKavarna, one of the first to publish the video (on July 31 in the morning), presents the author of the images as "Marek Chrastina".

AFP found this man (see "Verification process"); he is active on Facebook under the pseudonym "Marek Ch". On a comment published on July 31, he claims the viral video's authorship:

"It's great that you shot this video," one of his Facebook friends wrote in a comment on his page

"Thanks, I hope I won't regret it," was the response. 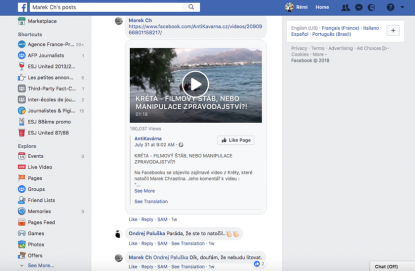 Contacted by AFP, "Marek Ch" confirmed his name is Marek Chrastina. He responded to AFP on Saturday, August 25, three days after the publication of our investigation, and confirmed he filmed the video. He says the video was shot on July 23.

The man wearing black shorts and a beige t-shirt, holding a drone in his left hand, is Giorgos Balotharis. This is him. The woman sitting on the green chair, behind the camera, is named Eleni Vlassi and describes herself as a journalist and as the art director of the International Documentary Festival of Ierapetra. This is her.

Before she was contacted by AFP, Vlassi was not aware that a video accusing her of manipulation was circulating on the internet. Even less so that the video had gone viral across Europe.

When asked for her version of the facts, she paints an entirely different picture.

"...these shots (of Vlassi directing the video) are part of the filming of the historical documentary 'Land of the Painful Virgin Mary' and refers to the historical event of the Asia Minor disaster of 1922," when thousands of Greeks in Asia Minor, chased from the wreckage of the Ottoman Empire, flocked to Greece, Vlassi explained to AFP.

"The scene is meant to take place in Turkey, in 1922, when the Greeks fled the Izmir fire. They escaped by sea, and some were drowned," she added, insisting that these frames "are not about modern migrants."

Vlassi told AFP that she is "reserving for herself the right to follow a legal course" against the author of the video for defaming her, considering its virality.

The documentary shooting began in September 2017 and finished on July 24, 2018. This scene was one of the last ones to be shot, "between July 20 and 24," according to Vlassi.

The people filmed in the water, and accused of faking a drowning, "are volunteers from cultural associations in Crete and Cretans of Asian Minor heritage," she added.

The director did not wish to give us a copy of the entire documentary as it is currently competing in several festivals, she explained, invoking legal reasons.

However, she did share the trailer for her documentary with AFP. In it, at the 4th and 5th second, we can see the actors appearing in the original video (see screenshot below). Those floating motionlessly on the water's surface, and the women in their black garments, their patterned and striped veils, and their large red and white bundles, are all in the documentary. 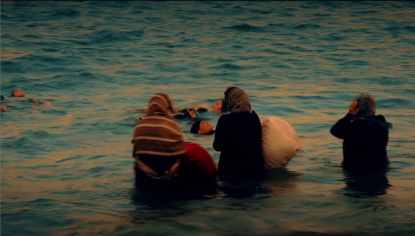 AFP sent Chrastina the trailer for the documentary, and on Saturday, August 25 he admitted that his video presented the facts incorrectly:

"I rather misjudged the situation and, as I have already written, I am sorry to have posted the video with a mistaken comment."

1. Identifying the geographical setting: several clues enabled us to find the exact location where the video was shot. First, the video’s author claims that the images were shot in Crete. Second, the presence of a tree on the beach (1), very close to the water, the beach’s moon crescent shape (crescent moon shape) (2), and the numerous apartment buildings (3) as well as a mountain (4) in the background. The are also several beach beach huts, not included in the frame below. 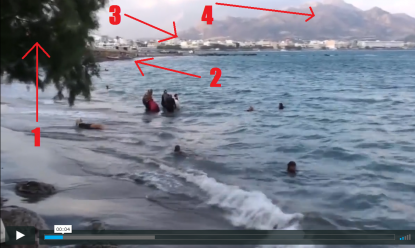 We then examined the Cretan coastline using Google Maps (satellite view) in search of these landmarks. We managed to identify a beach matching all of the above attributes, and confirmed with Google Street View that it was indeed the same place, by comparing the beach beach huts on the video. 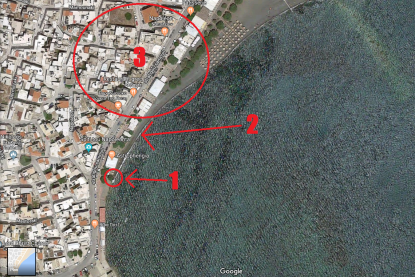 2. Identifying the video’s author:  thanks to a reverse image search using the InVID tool*, we identified several websites and pages that had shared the video. A Czech Facebook page presented the author as "Marek Chrastina".

A search for  "Marek Chrastina" on Facebook did not allow us to trace the author, who speaks in Czech on the video. The same name search on Russian social media site Vkontakte, which is popular in the Czech Republic, found a Facebook publication shared on Vkontakte that leads to a Facebook account whose ID is "marek.christina.1967". 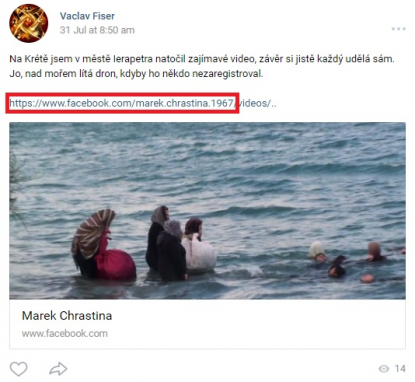 Copy/pasting this URL into our web browser allowed us to find his Facebook profile. He can be found under the pseudonym "Marek Ch". 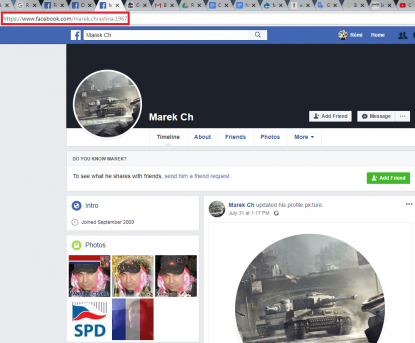 Using the "Who posted what?" tool (which allows for advanced searches of public Facebook posts), we found a comment by "Marek Ch" in which he claims to be the Ierapetra video's author.

Furthermore, between July 19 and 28, "Marek Ch" geolocated himself seven times on Facebook at the Almyra Hotel, a tourism complex in the small town of Koutsounari, 8.5 kilometres (5.2 miles) from Ierapetra. As a reminder, Vlassi told AFP that she was shooting on the Ierapetra beach "between July 20 and 24". 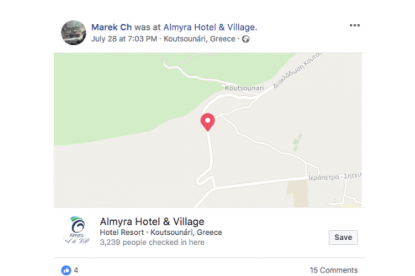 Questioned Saturday, August 25 by AFP, Chrastina confirmed in a Facebook exchange that he filmed the now viral video on July 23. As a reminder, Vlassi told AFP that she filmed the scene for her documentary on the Ierapetra beach "between July 20 and 24".

3. Identifying the film crew: this was the most important task in order to establish and understand what the people in the video by "Marek Ch" were doing.

We sent a screenshot of the video distinctly showing faces on the film crew members to several film directors and stringers in Crete, after finding their contacts on the internet.

Less than an hour and a half later, one of them, Manolis Kritsotakis, gave us the names of two of the shooting crew members (see article above), as well as the phone number and email address for Vlassi.