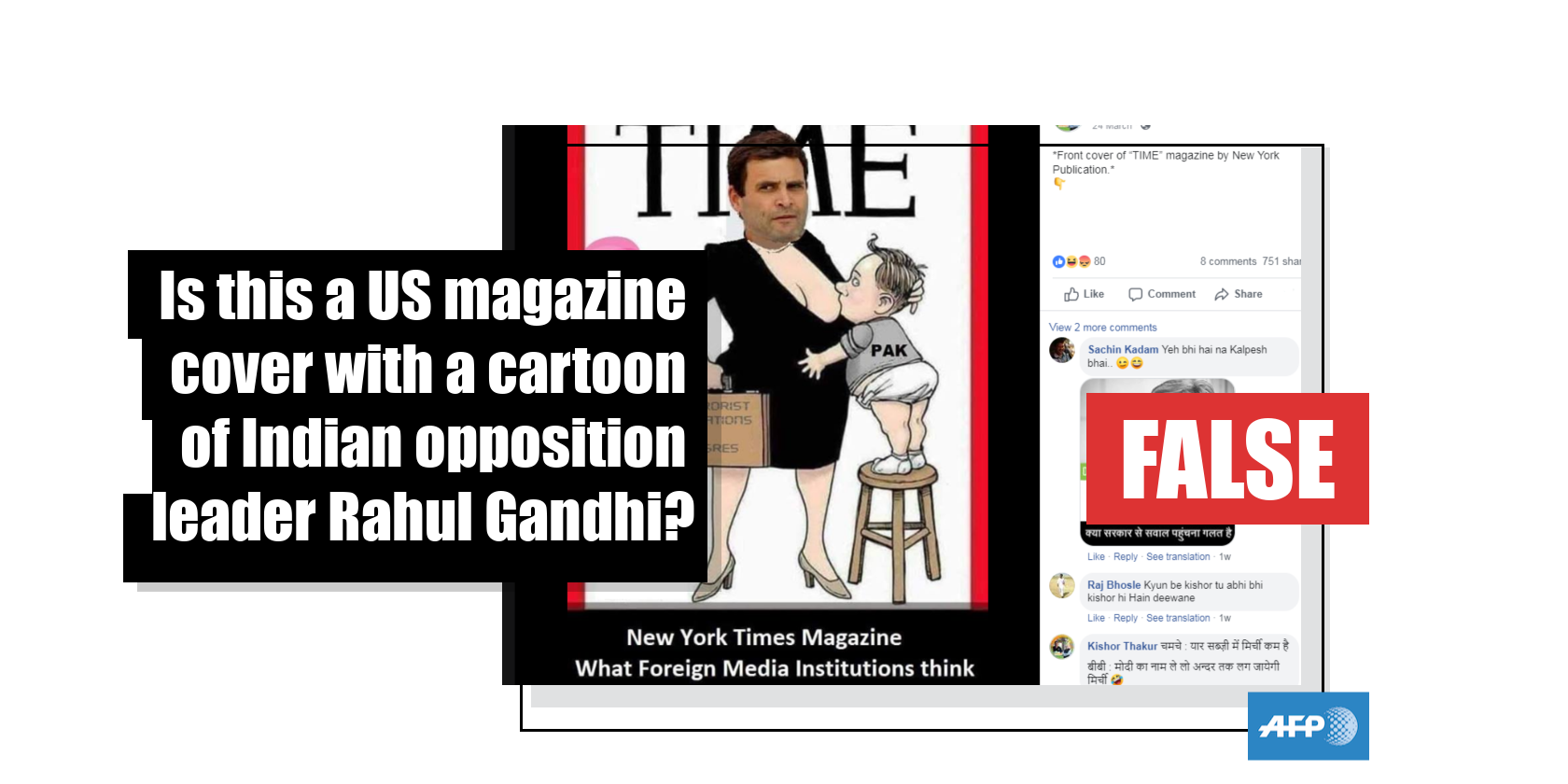 No, this is not a US magazine cover featuring a cartoon of Indian opposition leader Gandhi

A Facebook post shared hundreds of times claims the front page of a US magazine featured a cartoon of Indian opposition leader Rahul Gandhi. The claim is false; the image carried in the post has been doctored. The original cartoon, drawn in 2012 by David Horsey for the Los Angeles Times, is about corporate donations in American politics.

This post, which has been shared more than 700 times since it was published on Facebook March 24, 2019, contains an image that is supposed to resemble the front cover of US news magazine TIME.

The purported cover has the words "Feeding TIME" at the top and a cartoon with a photo of Gandhi’s face over an illustration of a woman breastfeeding a child.

The child has "Pak" written on its back, a term used to refer to Pakistan, according to the OED. The woman is holding a briefcase with the words "terrorist donations by Congres [sic]" on it.

India is due to hold elections between April 11 and May 19. Rahul Gandhi is the leader of India's National Congress party. Here is a recent AFP report on Gandhi’s campaign. 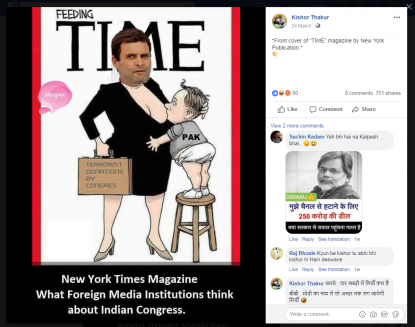 The image contains text below the purported magazine cover that says: “New York Times Magazine What foreign media institutions think about Indian Congress.” An unrelated Hindi name also appears in a small pink bubble on the left-hand side.

A Google reverse image search revealed that the original cartoon was drawn by an editorial cartoonist called David Horsey, whose bio here on the Los Angeles Times website says he has won two Pulitzer prizes.

The original cartoon, which shows a blonde woman breastfeeding a child with the words "GOP Congress" on its back, was published in this Los Angeles Times opinion article by Horsey dated May 14, 2012.

The woman's briefcase in the original cartoon says: "corporate campaign donations". The drawing has been signed by Horsey with a copyright symbol and the words: "2012 Los Angeles Times".

Below is a screenshot of the cartoon as it appears on the Los Angeles Times site, with the headline "Republican Party suckles at the breast of Big Business": 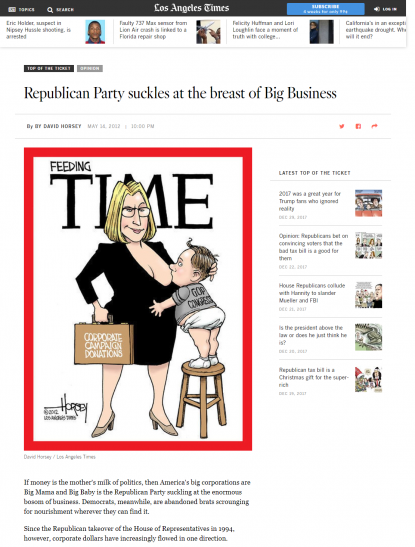 The cartoon was also published here on the website of the Association of American Editorial Cartoonists.

A Yandex reverse image search found that the part of the misleading picture showing Gandhi’s head is from a photo used in this December 23, 2017 report on the website of Indian newspaper the Financial Express.

The photo is credited to international news agency Reuters in the report. The headline says: "Will win 135 seats in next Gujarat Assembly elections, says Congress President Rahul Gandhi in Ahmedabad".

The image below compares the Facebook post (L) and a screenshot of the Financial Express article (R), with the matching part of the pictures circled in red:

AFP contacted Horsey, who said in an email dated April 4, 2019: "You are correct that the cartoon commenting on the Indian politician was a plagiarized revision of a cartoon I drew that was published in the Los Angeles Times on May 15, 2012."

He added: "My original cartoon was a lampoon of a Time magazine cover story about breastfeeding that featured a photograph of a young mother with her four-year-old son standing on stool to feed from her breast.

"The Time cover – it was not the New York Times magazine, by the way – was somewhat controversial because of the image. I played off the controversy and created a cartoon with the Republican-controlled U.S. Congress suckling at the breast of corporate special interests."