No, this is not a photo of Pakistan’s president sleeping in an airport lounge after taking office

Multiple online posts share a photograph of Pakistan’s President Arif Alvi, viewed tens of thousands of times, which they claim shows him sleeping in public at Islamabad airport after he took office in September 2018. The claims are false; the photo does show Alvi sleeping at the airport but it was taken in January 2018, before he became president.

For example, the photo was posted here on Twitter on March 29, 2019, and has been retweeted around 1,600 times since. 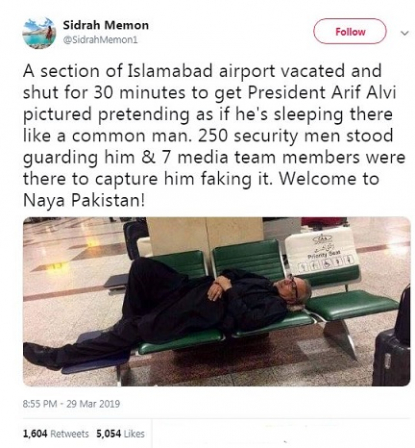 The caption reads: "A section of Islamabad airport vacated and shut for 30 minutes to get President Arif Alvi pictured pretending as if he’s sleeping there like a common man. 250 security men stood guarding him & 7 media team members were there to capture him faking it. Welcome to Naya Pakistan!"

"Naya Pakistan" is the slogan of current ruling party Pakistan Tehreek-e-Insaf (PTI), which came to power in national elections in July 2018. Here is the party's website.

Alvi became president of Pakistan on September 9, 2018, according to the official presidency website here. He gives his political affiliation as PTI on his official Facebook page here.

The same image and a similar claim were published March 31, 2019, in this post by Nawaiwaqt Urdu newspaper on their Facebook page which has more than 1.6 million followers.

The post links to this report by the newspaper, credited to INP (Independent News Pakistan) news agency, headlined: "Photo of president sleeping at airport lounge goes viral on social media".

Translated to English, the report says in part: “Recently the president was seen resting on a chair at Islamabad Airport and someone shot his photo which later went viral on social media. This photo of the president is from Islamabad airport and Pakistanis are praising him after seeing his simplicity."

Below is a screenshot of the Nawaiwaqt Urdu report: 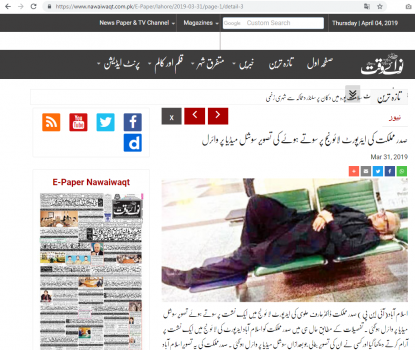 The photo also appeared in misleading posts with a similar claim here on YouTube, where it has been viewed more than 41,000 times, and here on Facebook.

But a Google reverse image search revealed Alvi tweeted the photo of himself on January 3, 2018, before he was president of Pakistan.

Flight from Lahore to Karachi 10 PM got cancelled because of fog. Waiting at Lahore airport since a couple of hours for PIA to let me know alternate flight or rescheduled time. pic.twitter.com/B0FH0kM8wV

The caption states: "Flight from Lahore to Karachi 10 PM got cancelled because of fog. Waiting at Lahore airport since a couple of hours for PIA to let me know alternate flight or rescheduled time."

Here is a report by Pakistani entertainment site Parhlo News published on January 4, 2018, which included the tweet.

Press Secretary to the president Tahir Khushnood told a reporter in AFP’s Islamabad bureau that the photo was taken before Alvi became president.

"This is an old photo when he was not president of Pakistan," he told AFP by phone.

The image has become the subject of several memes posted on Twitter, for example here, here and here. Among other scenarios these posts show Alvi sleeping on an MRI scanner, next to a dancer and beside a couple kissing in bed.

Here is an image that contains examples of these meme posts: