No, this is not UN report on world’s population

Posts claiming to quote a United Nations (UN) report identified as the First Quarter Demography Report 2019 are circulating in Africa. According to the report, the world's population stands at 7.8 billion people, made up of 5.6 billion women and 2.2 billion men. The posts are false. UN officials told AFP that the organization does not publish a quarterly demographic report. It releases World Population Prospects every 3-4 years and the 2019 report estimates that there are 3.824 billion women and 3.889 billion men globally.

The false report highlights figures for the male population -- claiming to show how few men are available for marriage -- then concludes by advising women why they should treat men with respect. 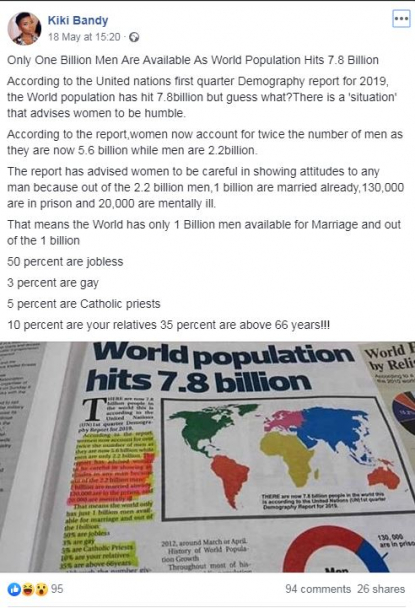 In Kenya, the claims were used to publish an article here, while in Nigeria, it was reported here.

This Twitter user, with more than 350,000 followers, tweeted the same report.

There are 7.8 billion people on earth, of which 5.6 billion are female and 2.2 billion are male.

Fredrick Okwayo, United Nations Population Fund Technical Adviser, Population Data Policy, told AFP the data in the false posts were not retrieved from the UN, adding that there is no report identified as First Quarter Demography.

"The newspaper cutting you shared does not quote UN data, we don't know the source nor the authors. The second issue is that the UN does not release demographic data on a quarterly basis," Okwayo said.

The UN official explained that the UN releases population reports every 3-4 years. The most recent World Population Prospects report was released on June 17, 2019 and is available here.