No, this is not a sculpture of Jakarta’s ex-governor at a Madame Tussauds wax museum

Multiple Facebook posts that have been shared hundreds of times contain a picture they claim shows a wax sculpture of an Indonesian politician on display at the Madame Tussauds museum in Hong Kong. The image actually depicts an action figure of the politician which has been sold online since at least 2017.

The posts were shared on Facebook days before Basuki Tjahaja Purnama, best known by his nickname Ahok, was released from prison on January 24 after serving 20 months in jail on blasphemy charges. Here is an AFP story on his release.

One of the posts featuring the image was this January 20 entry in a pro-Ahok Facebook group, which has more than 120,000 members. 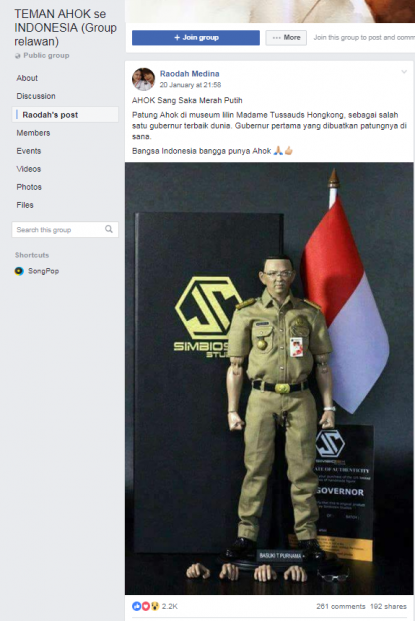 The post’s translated caption reads: “Ahok, the bearer of Indonesia’s sacred national flag. This is an Ahok sculpture at the Madame Tussauds wax museum in Hong Kong, something that confirms his status as one of the best provincial governors in the world. He is the first governor to have a wax sculpture exhibited at the museum. The Indonesian nation is proud to have Ahok.”

In the image in the misleading Facebook post, the figure of Ahok is pictured in green uniform and his arms are visibly jointed at the elbow and wrist. His full name is on a small nameplate at his feet.

In May 2017, Jakarta’s then top politician -- a Christian of ethnic Chinese descent -- was jailed for blaspheming Islam in a comment he made on the campaign trail during his re-election bid, which he subsequently lost. Here is an AFP report on his jailing.

Many comments in the post praised the purported wax sculpture, including this January 23 remark: “Great. Okay, this is cool.”

According to a reverse image search the image was taken from an advertisement for an action figure of the former politician which was posted to Instagram by the toy’s maker, Simbiosix Studios, on August 17, 2017.

In the post, the creator said it “apologises for the late release of The Governor ⅙ scale collectible action figure.”

Simbiosix Studios also shared the image on the same day to its Facebook page. 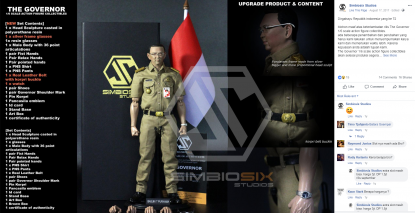