No, this is not a photo of the youngest victim of the Easter Sunday attacks in Sri Lanka

A photograph of a man weeping over a child’s body has been shared thousands of times in Facebook posts which claim it shows the youngest victim of the Easter Sunday bombings in Sri Lanka. The claim is false; the image was posted online nearly a year prior to the April 21, 2019 attacks.

Multiple Facebook posts, for example this one published April 23, 2019 and shared more than 3,600 times in less than 24 hours, share the photograph, which shows a man crying over the body of a small girl.

The post was uploaded two days after attacks on churches and hotels in Sri Lanka on Easter Sunday which left 258 people dead. Here is an AFP report on the Sri Lanka attacks.

The Arabic-language text across the bottom of the photo says: "The youngest martyr from Sri Lanka martyrs. The number of the martyrs is 290. This scene is enough to kill the world because of the pain." 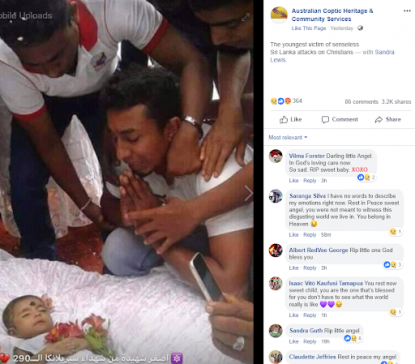 The same picture and similar claims have been posted repeatedly on social media, for example here and here on Facebook and here on Twitter.

But a Google reverse image search found the photograph had actually circulated online for nearly a year before the Easter Sunday attacks in Sri Lanka.

For example, the exact same photo as is used in the misleading posts, and other images showing the same scene, were posted here on May 8, 2018, alongside an article headlined: “What bigger sorrow for a father?”

The exact same image and a similar caption were also posted here and here on May 12, 2018 on Facebook.

The Facebook posts’ caption says: “How can I bear this sadness....
Please don't let a father feel this kind of sadness in this world......... dear, there may be no merit in this soul... but I wish you to be blessed by this journey little dear......”

The photo was also published here in October 2018 in a post that included more images of the same man and child.

Below is a comparison between the photo included in the misleading Facebook post (L), and the other photos published online months before the Easter Sunday attacks (R):

UNICEF said in a statement here on April 23 that the youngest victim of the Sri Lanka Easter Sunday attacks was about 18 months old. The humanitarian agency has not provided further information about the identity or nationality of the victim.

UPDATE: This fact check was updated on 16 May, 2019 with a revised death toll.