No, this is not a photo of a man being burned alive in Nepal for sexually harassing a child

A photo of a man tied to a cross being burned alive has been shared tens of thousands of times in Facebook posts which claim that the man had sexually harassed a 5-year old child in Nepal. The claim is false; the image is in fact a photo by the Associated Press news agency which shows a thief being punished by villagers in Ecuador. 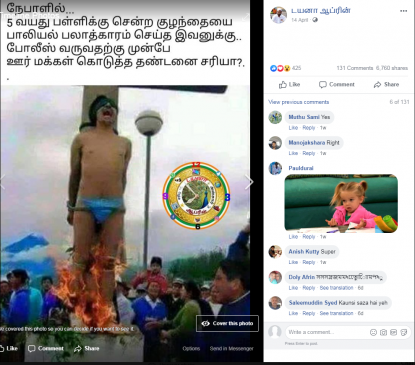 The image combines a graphic image of a man tied to a cross as flames lick at his legs with Tamil language text across the top which translates to English as: “This person in Nepal had sexually harassed a 5-year old school kid; even before police come into scene the villagers had punished him. Do you think if this action is correct?”

The same image was also posted here on Facebook on February 12, 2019 alongside a different misleading claim, also about Nepal.

The post’s caption says: “Burn alive in Nepal for preaching Gospel. Please pray for the preachers around the world. And type amen to support them....”

Both claims in the misleading Facebook posts are false; the image is in fact a photo by the Associated Press news agency which shows a thief being punished by villagers in Ecuador.

The AP photo’s caption states: “Mario Quishpe shouts as villagers burn his legs after allegedly being caught stealing in Pelileo Grande, Ecuador, some 75 miles south of Quito, Tuesday, Oct. 10, 2006. A parish priest, along with other villagers, managed to extinguish the flames before he was taken by police to the hospital where his burns were treated.”

Below is a screenshot of the photo on the AP website: