No, this is not a photo of a foreign policewoman in Indonesia – it’s a doctored image using the face of a K-Pop star

A photo of a woman in Indonesian police uniform has been shared hundreds of times in multiple Facebook posts which claim it shows a foreign policewoman. The claim is false; the image has been edited from an original photograph of Indonesian policewoman Vani Simbolon with the face of K-pop star Kang Seul-gi superimposed on top.

These June 14, 2019 Facebook posts here and here contain an image of a woman wearing an Indonesian police uniform.

The Indonesian-language caption translates as: “Dispatched policewomen come from the Soeta every night, claiming to be tourists but they become policewomen. Allah has revealed the Indonesian police’s deceits.” 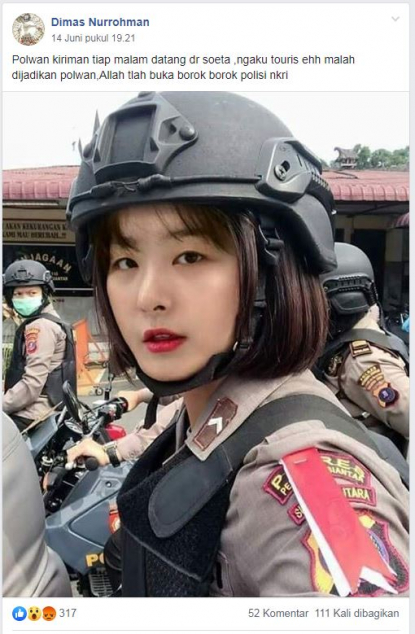 The same uniform can be seen here worn by other policewomen in photos published on the official Facebook account of the Indonesian police's public relations unit.

Soeta refers to Soekarno-Hatta International Airport, Indonesia’s largest airport located in the province of Banten, near the country’s capital, Jakarta.

Reverse image searches on Yandex traced the photo back to a photo showing an Indonesian policewoman named Vani Simbolon.

The photo was taken two days before Indonesian elections on April 17, 2019.

The Indonesian-language caption translates as: “Preparations for a patrol to secure conditions for the 2019 elections.”

Here is an AFP report on Indonesia’s April elections.

Comparison of the original image (L), when it is reversed (C) and the misleading image (R)

In the edited photo, the face of Kang Seul-gi, a member of K-pop group Red Velvet, who is better known as Seulgi, has been superimposed on top of Vani’s face.

Here is the original photo of Seulgi, posted to Instagram on January 6, 2019. Below is a comparison between Seulgi’s original image (L), the mirror version of it (C) and the image in the misleading Facebook posts (R): 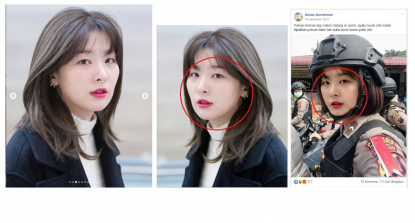 Comparison of the original image (L), the mirror version (C) and the misleading image (R)

The edited photo has circulated online since May 2019 and appears to be originally treated as a joke.

For example, the same photo was shared in this May 28, 2019, post to a Facebook page called Red Velvet Indonesia.

Translated to English, the caption reads: “Admin, seulgi has become a policewoman”. The post is embedded below:

A Red Velvet fan account on Twitter told its followers in this tweet on May 28, 2019, to stop sharing the edited image after it was used out of context to claim that policewomen have been “sent” from abroad.

AFP spoke to a Twitter and Instagram user named Ririn, who said she had edited the image to share with K-pop fans before Eid holidays starting on June 5, 2019.

Ririn also sent AFP her edited photo, which she said was “pure from my picsart folder”.

In her edited version, the picture is not reversed and it has a watermark that says “itsmekr1”.

Below is Ririn’s edited photo: In the misleading Facebook posts, the image is reversed and the watermark has been removed.

Here is a side-by-side comparison of Ririn’s edited image and the edited photo shared in misleading Facebook posts: Ririn also said, “Since my photo was misinterpreted, I have deleted all my edits that I uploaded, including the policewoman picture.”