No, this is not a photo of a Florida airport after Hurricane Michael

A photo purportedly depicting a flooded Florida airport after Hurricane Michael is fake. The photo dates back to 2013, and is a Photoshopped simulation of the possible effects of climate change on New York’s LaGuardia airport in the future.

A photograph was shared tens of thousands of times on October 11, because it allegedly showed the impact of Hurricane Michael on the Northwest Florida Beaches International Airport. The photo depicts an airport tarmac flooded by waters so high that planes are nearly entirely submerged, some with just the tails above the surface. The skyline of a large city is visible in the background. 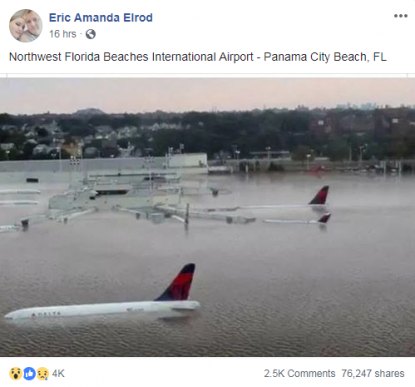 The original image is credited to Nickolay Lamm  and appeared in a 2013 report on the future effects of climate change on airports in the US. The photo was made for Climate Central, an organization of scientists and journalists specialized in the impact of climate change. The airport depicted is New York’s LaGuardia airport in Queens, with Manhattan skyline in the background.

By contrast, the area around the Northwest Florida Beaches International Airport is much less urbanized, and covered in trees.

In a statement posted on Facebook, the Northwest Florida Beaches International Airport, also known by the airport code ECP, warned travellers, “The photo you may have seen circulating the internet is NOT ECP.”

The photo was already shared out of context in 2017 during Hurricane Harvey, when it was purported to depict a flooded Houston, Texas airport. 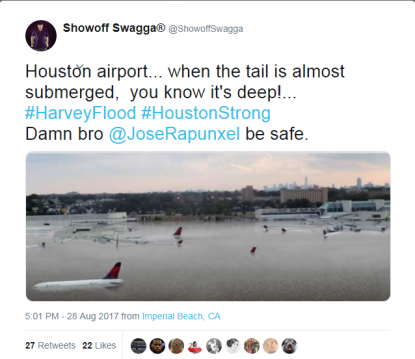