No, this is not a photo of black durian fruit

An image purporting to show black-skinned durian fruit growing on a tree has been shared dozens of times in multiple posts on Facebook and Twitter that claim it is a new species called Blackthorn. The image has been doctored from an original in which the fruit appears green. A new durian variety called Blackthorn does exist, but it is not black in colour.

The photo was published in this Facebook post on June 3, 2019 by a page called “Singapore Incidents”, which has more than 96,000 followers.

The photo, which has been shared more than 85 times, shows four durian fruit with black husks, alongside a caption that states: “New durian species, Blackthorn”.

Durian is a pungent tropical fruit grown in Southeast Asia; here is a dictionary definition. 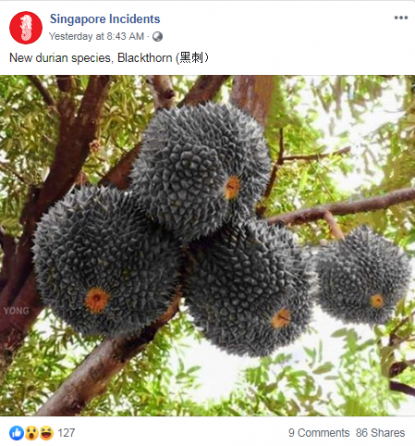 The image in the misleading post has been doctored; a reverse image search on Google found a similar photo in this article published on June 4, 2016, on the website of Malaysian Chinese newspaper Nanyang Siang Pau.

The photo in the article is almost identical to the image in the misleading post, but it shows the durians with green outer shells, not black.

Some other elements are different in the two photos; for example, there is a light blue string hanging from the tree in the original image which does not appear in the misleading Facebook post.

Below is a screenshot comparison of the photo in the misleading Facebook post (L) with the photo published in the 2016 article (R): 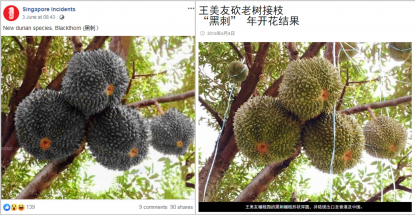 The Blackthorn variety’s website states here that the new fruit variety was created in Penang, Malaysia.

The site also contains multiple pictures of blackthorn durians, which are not black-skinned as claimed.

Below is a screenshot of the site’s photo gallery page. The “matured fruiting trees” section shows the variety with its green husk.

No, these photos do not show a mosque attacked by police officers in Indonesia

No, this video does not show a Muslim praying at a Sikh temple in Malaysia where a Muslim lawmaker was criticised for attending an interfaith iftar