No, this is not a photo of Argentine revolutionary Che Guevara

A photo has been shared hundreds of times in multiple posts on Facebook, Twitter and Reddit alongside a claim it shows Argentine revolutionary Che Guevara pointing a gun at two women. The claim is false; the photo shows a theatrical scene staged in Atlanta, Georgia, nearly 22 years after Guevara’s death.

The text superimposed on the image states: “THIS is the image of Che Guevara that should be seen on t-shirts.” 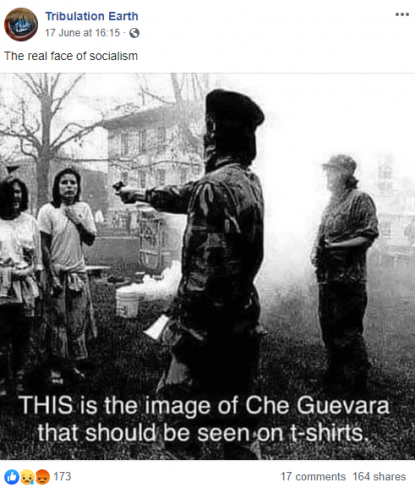 The misleading post’s caption states: “The real face of socialism”.

Che Guevara was an Argentine communist revolutionary who played a major role in the Cuban Revolution. He died in 1967.

The same photo was shared on Twitter here, here, here and here with a similar claim.

It was also shared here on online forum Reddit with a similar claim.

It was also shared here on website Quora with a similar claim.

The claim is false; the photo shows a theatrical scene staged in Atlanta, Georgia, more than two decades after Guevara died.

A reverse image search on Google found a wider crop of the same photo published here on January 25, 2007, on the website for the Committee in Solidarity with the People of El Salvador (CISPES).

On its website here, CISPES states it is a Washington DC-based group “that has been supporting the Salvadoran people’s struggle for social and economic justice since 1980."

Below is a screenshot comparison of the photo in the misleading post (L) and the CISPES photo (R):

Emory College, now Emory University, was founded in Oxford, Georgia, in 1836, according to its website.

In an emailed statement to AFP on June 25, 2019, Emory University Archivist John Bence said the photo was taken on the university’s campus.

“The photo was taken of a theatrical demonstration taking place on Emory’s campus to raise awareness of humanitarian crises created by war in El Salvador and Guatemala and of US military involvement in that war,” he said, “It was entitled ‘Guerilla Theater’ but It was not theatrical production, per se.”

Below is a screenshot of the email:

In the same email to AFP, Bence also provided a digital copy of an edition of the university’s student-run newspaper, the Emory Wheel.

The article reads in part: “The Emory Central America Network (ECAN) began a week-long series of demonstrations on Monday, March 20 with the construction of a refugee encampment and a presentation of a production entitled ‘Guerilla Theatre’ in front of the Candler Library.”

Below is a screenshot of the newspaper article: 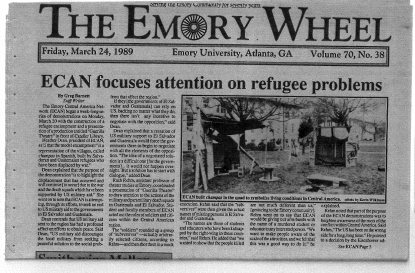 Similar buildings as seen in the photo in the misleading post can be seen in Emory University’s quadrangle, as shown here on Google Street View.

Below is a screenshot comparison of the photo in the misleading post (L) and Google Street View imagery (R) with areas of similarities circled in red: