No, this is not a Pakistani tea advert starring Indian pilot Abhinandan Varthaman

Multiple Facebook posts share a video they claim shows an advert for a Pakistani tea brand starring Abhinandan Varthaman, the Indian Air Force pilot who was captured by Pakistan and later released. The claim is false; the video is a doctored version of an old advert which has been online since 2010.

Wing Commander Abhinandan was shot down and captured by Pakistan then returned to India on March 1, 2019. Here is an AFP report on the incident.

Multiple Facebook posts, for example here on March 7 and here on March 10, share a video they claim shows Abhinandan in an advert for Karachi-based Tapal Tea.

The 40-second clip features Abhinandan three times: he is seen in a binocular-shaped frame drinking tea from a white cup at 0:06 seconds, at 0:14 seconds and again at 0:30 seconds, when he is heard saying: "The tea is fantastic, thank you."

The caption on this post, published March 7, 2019, says: "Wg. Cdr. Abhinandan is now part of Pakistani advertisement for Tea!! Tapal Tea is a Pakistani major tea brand, based in Karachi" 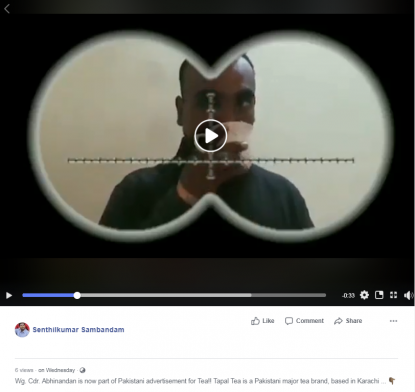 A reverse image search found the original advert was published here on YouTube in 2010 by a talent agency in Karachi called Citrus Talent.

The original video, uploaded December 28, 2010, is titled "Tapal Dandedar- TVC" and shows a woman using binoculars to watch a couple who are standing on a balcony and drinking tea.

Below is a side-by-side comparison of video screengrabs from the misleading video (L) and the YouTube video (R): 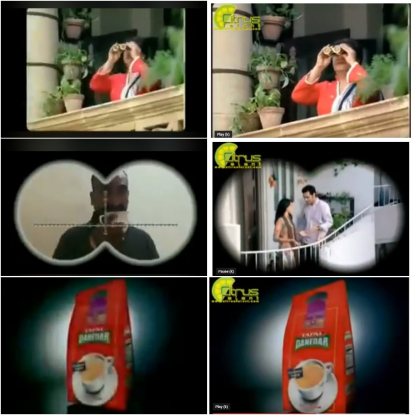 The clips of Abhinandan have been taken from a video released by Pakistan's military when he was in their custody.

The video can be seen here on AFP's official YouTube channel.

At 0:39 seconds in the Dawn video, Abhinandan is seen sipping tea – a clip which was edited into the misleading video – and at 0:55 seconds he is heard saying, “The tea is fantastic, thank you.”