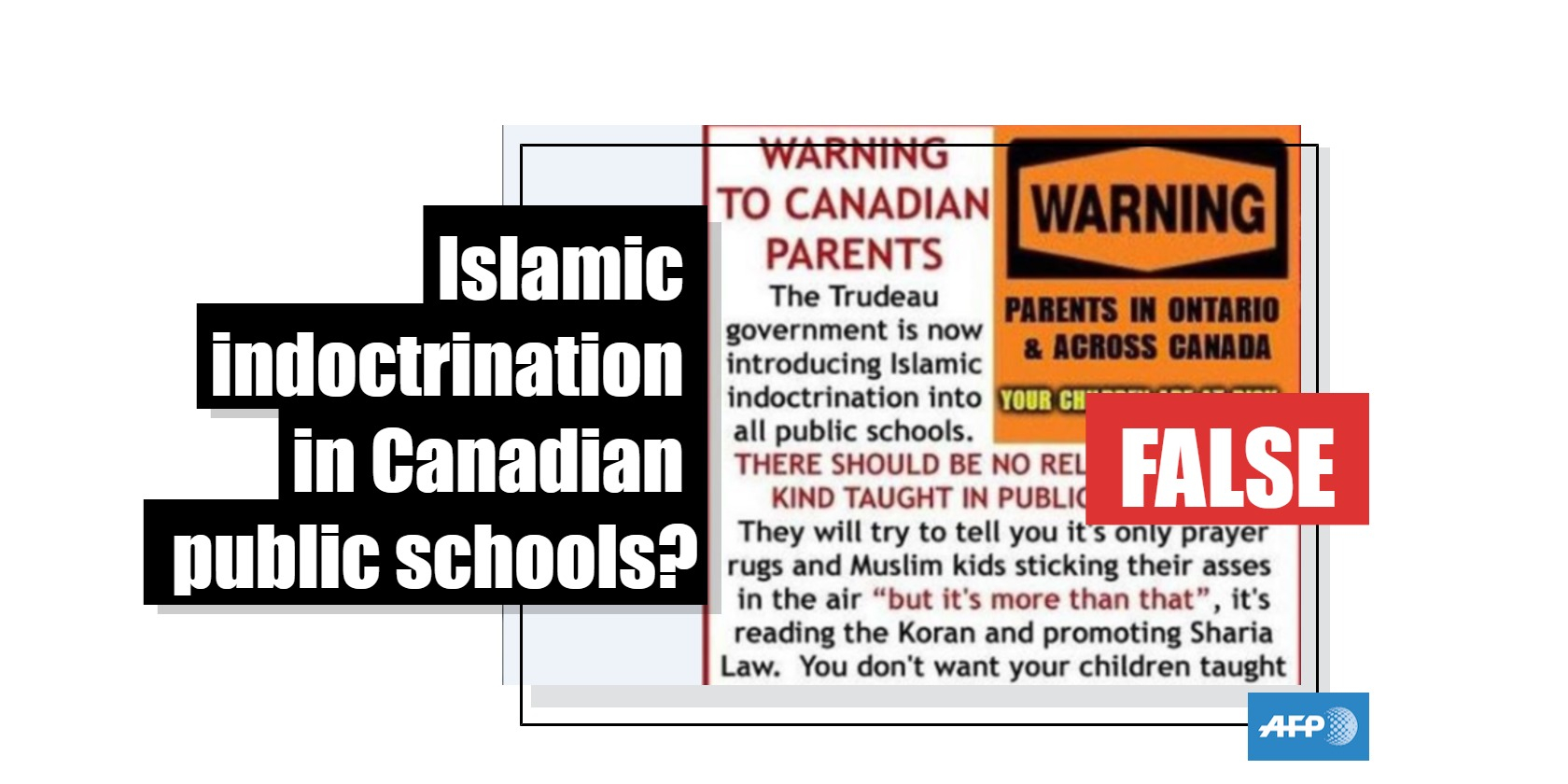 No, 'Islamic indoctrination' was not introduced in Canadian public schools

A Facebook post claims that Canada’s government “is now introducing Islamic indoctrination into all public schools,” with students reading the Koran and promoting Sharia law. This is false: Canada’s public education is secular and does not teach religious precepts, nor can the federal government impose curriculum as education is a provincial prerogative.

A “Warning to Canadian Parents” shared on Facebook exhorts parents “in Ontario and across Canada” to beware the Islamic indoctrination of youth in all of the country’s public schools. The culprit, the post argues, is Canada’s Liberal Prime Minister Justin Trudeau and his government. 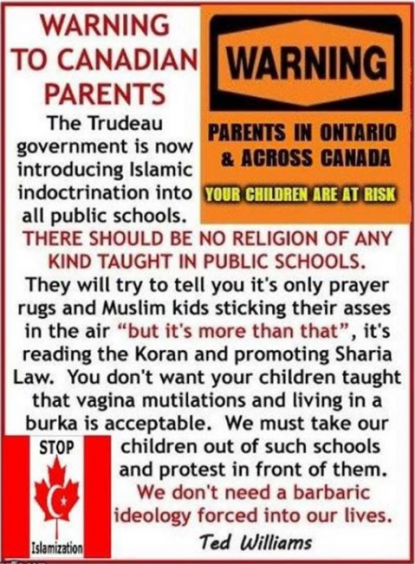 Trudeau’s government can not introduce any changes to curricula in Canadian public schools, as education is a provincial matter in the country, and each of the ten provinces and three territories is in charge of designing its own policies. Section 93 of the Canadian Constitution grants provinces exclusive powers to legislate over matters pertaining to education.

Screenshot of the Canadian Constitution

Beyond the provincial prerogative over education, neither Koranic precepts nor Sharia law could be taught in any Canadian public school, because religious education is not part of any province or territory’s curricula.

“There is nothing in our curriculum that has anything to do with any religion,” said Jennifer Burke, director of curricula for the Nova Scotia department of education.

Julie DeVoin, Burke’s counterpart in Manitoba, also dismissed the meme as false, adding that “cultural practices such as female genital mutilation are not promoted or taught as acceptable in schools.”

The provinces of Alberta, Saskatchewan, and Ontario are exceptions to this rule. These provinces allow the existence of separate school boards, which allow Protestant or Catholic schools in areas where either faith is the minority, to receive public funding while still providing religious teaching. The separate schools exception does not apply to any other religion in Canada, including Islam. Over 50 Christian school boards in Canada are publicly funded while providing religious instruction.

Even then, other public schools in those provinces are not to teach religious matters. “Religious instruction is not part of the provincially mandated curriculum,” Lindsay Harvey, press secretary for the government of Alberta, told AFP, adding that no changes have recently been made to the nature of religious instruction in the Western province.

Contacted by AFP, the administrator of the Facebook page responsible for the most popular publication of the post about Islamic education in Canada did not provide any concrete examples to support claims made in the meme. The administrator, who would not disclose their identity, instead referred to a perceived promotion of Islamic matters in Canadian schools, pointing to the recent World Hijab Day as an example.

World Hijab Day is an initiative that invites non-Muslims and Muslim women who do not cover their heads, to wear the Muslim head-scarf for a day each year on February 1. The initiative is usually organized by student groups on post-secondary institution campuses, and more rarely in some high schools.

However, it is not in any way part of any official curriculum in Canada. Allowing or encouraging the event is left to the discretion of schools themselves, several education ministries told AFP.

The event is described by organizers as an invitation to experience the Islamic headscarf and break stereotypes around those who wear it, while some individuals have called it an propaganda campaign.