No, this is not an Indonesian election poll showing an ex-general in the lead

A post on Facebook which has been shared hundreds of times purports to show survey results from a respected Jakarta-based pollster giving former military general Prabowo Subianto a commanding lead in the race for Indonesia’s presidency. The pollster, however, said it had not conducted the survey and real polls have shown incumbent president Joko Widodo well ahead of Subianto ahead of April elections.

An image shared to Facebook on January 15 appears to show that 67.8 percent of the poll’s respondents favoured Subianto and his running mate Sandiaga Uno after the ex-general delivered a speech.

In the image Widodo, pictured alongside his running mate Muslim cleric Ma’ruf Amin, had 32.2 percent support. The logo of Saiful Mujani Research and Consulting (SMRC), a pollster, can be seen above the candidates’ faces. 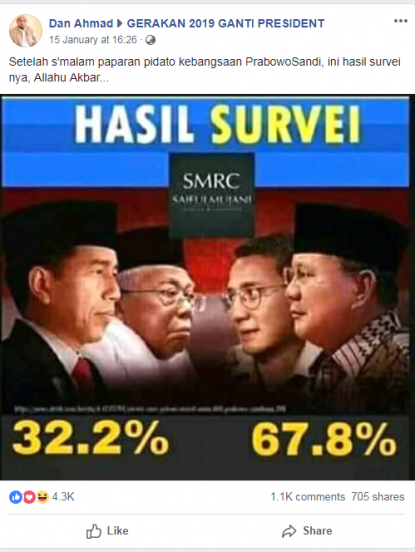 The post’s translated caption reads: “These are the results of a survey conducted after Prabowo-Sandi’s nationalistic speech last night.”

It refers to Subianto’s campaign speech on January 14.

Here is a video of the speech uploaded to YouTube by his political party Gerindra. Here is a report by Indonesian newspaper The Jakarta Post about the event.

The pollster’s executive director Djayadi Hanan rejected the Facebook post’s claims that his firm was behind the survey.

“We have never conducted any survey with results like that,” he told AFP in an interview. “The post has irresponsibly used SMRC’s name.”

The most recent survey published on SMRC’s website was a presidential poll from September 2018, several months before the one published in the Facebook post. It showed Widodo leading with 60 percent of the poll's respondents favouring him.