No, this is not an image of the aftermath of a recent bomb test inside a Pakistani mosque

Multiple Facebook and Twitter posts have shared a photo that they claim shows the aftermath of a bomb test inside a mosque in Karachi in Pakistan. The claim is false; it originated on a parody Twitter account; the photo is actually an AFP image of a 2004 bomb attack on a Shiite mosque in Karachi.

The tweet contains a photograph of a mosque covered in debris and has a caption saying: “#NewsFlash #Karachi Blast during bomb test in a Mosque, 15 scientists dead, 10 seriously injured.”

Below is a screenshot of the misleading Tweet, which has been retweeted more than 4,000 times since it was posted on March 11: 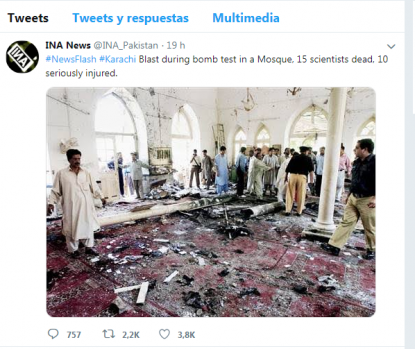 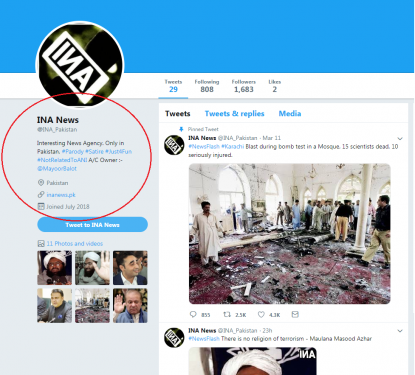 ANI is the acronym for Asian News International, an Indian news agency.

The INA logo is a reversal of the ANI logo.

Below is a screenshot of the ANI logo as seen on their verified Twitter account, which has nearly three million followers: 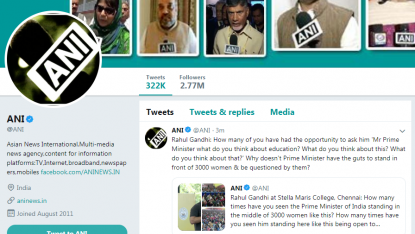 The account has not yet Tweeted but has 13,900 followers.

The caption of the misleading Facebook post says: “The Madrasa scientist of Pakistan got their 72 virgins while testing bomb in mosque,” followed by three laughing face emojis. 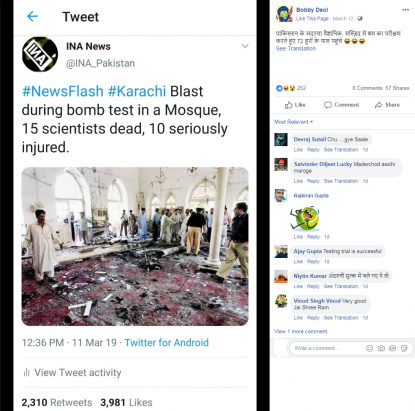 This Twitter user retweeting the INA tweet says: “Finally a true pic and a REAL definition of MOSLEMS sacred place called mosque ... and all those RAM MANDIR virodhi's use to fantasize that Mosques are the place for prayer..”

“RAM MANDIR virodhis” refers to people opposed to the building of a Hindu temple at Ayodhya in India's Uttar Pradesh state. In 1992, a mosque at the site was razed, sparking violence that killed more than 2,000 people. Here is an AFP report on the Ayodhya tensions.

A Google reverse image search found the image in the misleading posts is actually an AFP photo of a 2004 attack on a Shiite mosque in Karachi.

The image can be viewed here on AFP Forum. 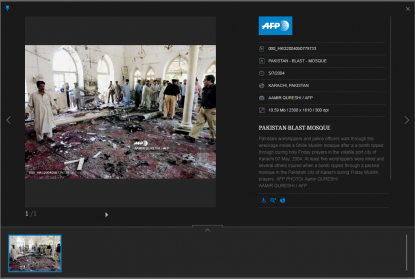 The AFP photograph's caption says: "Pakistani worshippers and police officers walk through the wreckage inside a Shiite Muslim mosque after a bomb ripped through during holy Friday prayers in the volatile port city of Karachi 07 May, 2004. At least five worshippers were killed and several others injured when a bomb ripped through a packed mosque in the Pakistani city of Karachi during Friday Muslim prayers."

Here is an AFP report on the aftermath of the 2004 attack.