No, this is not a genuine photo of a blue owl in Madagascar

An image has been shared thousands of times in multiple posts on Facebook and Twitter which claim it shows a blue owl in Madagascar. The claim is false; the image has been doctored from a photo of a brown Guatemalan pygmy owl.

The doctored image was published in this Facebook post on October 11, 2018, where it has been shared more than 1,300 times. 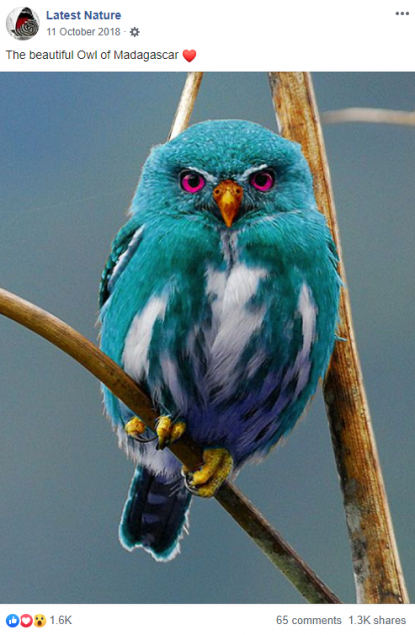 The caption states: “The beautiful Owl of Madagascar”, followed by a heart emoji.

The same doctored image was shared hundreds of times in another post on Facebook here with an identical claim, and on Twitter for example here and here.

The claim is false; the image has been doctored from this photo of a brown Guatemalan pygmy owl published on May 17, 2017, by owl enthusiast website Owling.com.

The photo caption states: “Alta Verapaz, Guatemala, 5/2008. Knut took this nice photo of a Guatemalan Pygmy-Owl in the highlands of Guatemala.” 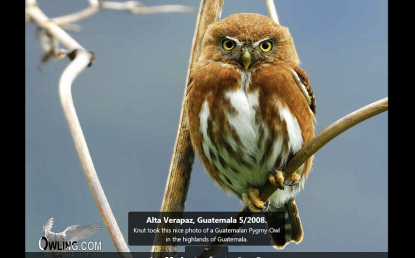 A screenshot of the photo on Owling.com credited to Knut Eisermann

The doctored image is a mirrored version of the Owling.com photo.

It has subsequently been manipulated to include blue feathers, an orange beak and pink eyes.

Below is a screenshot comparison of the photo in the misleading posts (L) and the photo on Owling.com (R):

A screenshot comparison of the photo in the misleading posts (L) and the photo on Owling.com (R)

The Owling.com photo is credited to Knut Eisermann. His name can be seen alongside the Owling.com watermark in the bottom left-hand corner of the photo.

Below is a zoomed-in screenshot of the Owling.com watermark and the credit “2017 Knut Eisermann”: 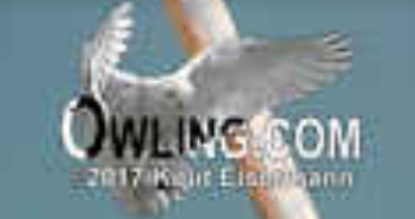 Eisermann is included in this reference page published on Owling.com on May 17, 2017.

He is also listed as a bird-watching guide based in Guatemala on this website for Guatemala-based tour company Cayaya Birding.

Other photos of Guatemalan pygmy owls credited to Knut Eisermann were published here on December 14, 2011, by the Proeval Raxmu Bird Monitoring Program, a bird conservation website focussing on Guatemala and Middle America.