No, this is not a genuine news report stating regional leaders must do what Indonesia’s president wants

A blog post resembling a major Indonesian media group's website has created what appears to be a news article with a headline stating regional leaders must do whatever President Joko Widodo wants. The blog is not linked to the media group and it has manufactured false news using a doctored headline and an old photo.

The headline of the March 2 blog post from tribuninf0.blogspot.com translates as: “Home minister: regional leaders, from village heads to governors, cannot remain neutral. They must do whatever Mr. Jokowi wants”. 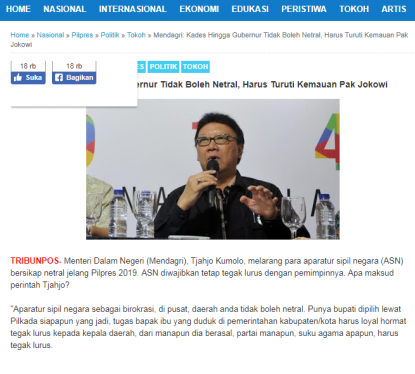 Widodo, who is seeking re-election in April, is best known in Indonesia by his nickname, Jokowi.

The blog post has a photo of Indonesia's Home Minister Tjahjo Kumolo. Here is his official website.

The blog’s name and logo resemble those of Tribunnews, an Indonesia-based news organisation.

Links to the blog post showing the purported article have been shared thousands of times after it appeared on Facebook, such as here, here, here and here. The last post said in its caption that Widodo, “as time went by, has become increasingly authoritarian”.

The tribuninf0.blogspot.com blog that hosted the purported article has since been removed. However, screenshots of the misleading blog post continue to be shared on Facebook, such as here and here.

The post’s first paragraph translates to: “Home minister Tjahjo Kumolo prohibits civil servants from being neutral ahead of the 2019 presidential election. Civil servants are required to obey their superior. What does this order from Tjahjo mean?”

The headline of the Detik.com report, however, does not say: “They must do whatever Mr. Jokowi wants” -- the words found in the blog post title. The original headline translates as: “Home minister: Civil servants cannot be neutral, please disseminate Mr. Jokowi’s programs”.

The photo used in the blog post can be traced back to major Indonesian news portal Liputan6.com, credited to “Liputan6.com/Johan Tallo”.

Using Google reverse image search, AFP found the photo in this 2014 article on Liputan6's website, headlined: “These are the short-term programs of home minister Tjahjo Kumolo”.

No, this photo does not show the daughter of Philippine President Rodrigo Duterte criticising pro-administration Senate candidates

No, this is not a video of the man accused of killing 50 people in New Zealand mosques being beaten in prison