No, this news clip does not show Indonesia's president handing out cash to citizens ahead of national elections

A Facebook post shares a video that it claims shows Indonesian President Joko Widodo -- popularly known as Jokowi -- handing out cash to residents of a small town months before national polls in which he is running for re-election. The post, which has been viewed thousands of times, is misleading. The footage is almost four years old and was shot after Jokowi was first elected president.

Shared to Facebook on December 29, 2018, the post features a clip by local broadcaster SCTV with a caption that translates as: "Jokowi gives out money in Ngawi, December 25, 2018.”

It was viewed more than 1,500 times in the week after it was posted.

The logo of SCTV news program Liputan 6 can be seen at the bottom-left of the video. 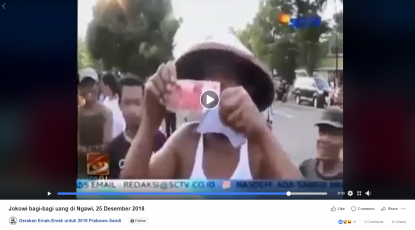 The post was shared by the Facebook page “Gerakan Emak-Emak untuk 2019 Prabowo-Sandi” (The Movement of Mothers for Prabowo-Sandi in 2019).

The footage used for the 1-minute, 11-second clip is real and does show Widodo handing out envelopes with 100,000 rupiahs ($7) each to locals in the town of Ngawi.

But the post's claim that the event took place on Christmas Day 2018 is incorrect.

The footage is from a report dated March 8, 2015, which was published in Liputan6.com.

The original video can be viewed here.

It is not unusual for Indonesian politicians to hand out gifts, such as cooking oil, rice or clothing and sometimes cash, in the communities they visit.

“After having lunch in Karangasri village, Ngawi, East Java, President Joko Widodo meets some locals who are waiting for him on the side of the road," the clip says.

"Not only do they shake the president’s hand, but they also get envelopes from the president, each containing Rp 100,000.”

Jokowi was elected about five months before the original footage was shot.