No, Muslims are not banned from Poland and Japan

“Terror attacks in Japan: 0. Terror attacks in Poland: 0, What do these countries have in common? Permanent ban on Muslim migrants.” These words, printed in white font over a plain orange background, were shared at least 54,000 times since their publication in a Facebook post on May 9, 2019. 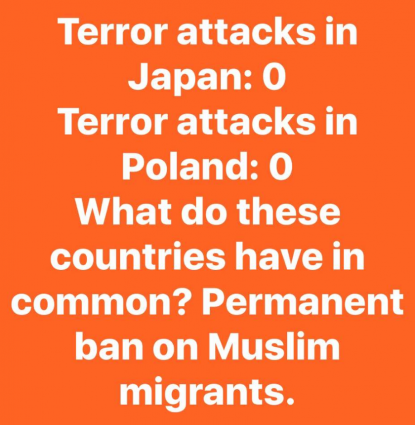 Although both Japan and Poland are known for the homogeneity of their populations, thousands of Muslims live in both countries and terror attacks have been recorded in the past.

Immigration to Japan and Poland

Japan does not have a Muslim ban. This note from the Immigration Bureau of Japan outlines the requirements to permanent residency in Japan, without mentioning any restrictions based on religion. Nothing in Japan’s Nationality Law suggests that Muslims cannot become Japanese citizens. A search of both documents for the words “religion” and “Islam” shows no results.

Some 100,000 foreign Muslims and 10,000 Japanese Muslims lived in Japan in 2011, according to a study by Hirofumi Tanada, professor at the Human Sciences Faculty of Waseda University in Tokyo. This document from the Japanese statistics agency includes data on all foreign residents in Japan by country of origin, including Muslim-majority countries such as Indonesia.

Muslims practice their religion throughout Japan. According to this article by professor Tanada, there are more than 90 mosques throughout Japan. In 2017, Japanese prime minister Shinzo Abe hosted an Iftar, the fast-breaking meal during the holy month of Ramadan, in his own office.

As a member of the European Union, Poland has joined the Schengen area, a group of 26 European countries that have abolished borders and visa restrictions. Citizens can move freely in the area’s 26 countries, including Poland, regardless of their religion. 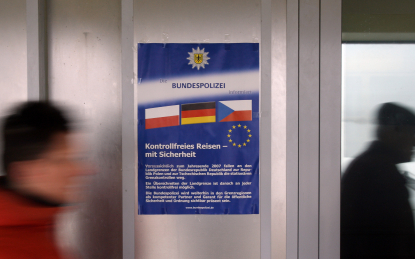 A sign informing people of the opening of the borders between Germany, Poland and the Czech Republic hangs at a border crossing in Frankurt/Oder 21 December 2007, after border control was officially abolished on midnight 20 December 2007. (AFP / John Macdougall)

As a precondition to its membership in the EU, Poland must also comply with the Charter of Fundamental Rights of the European Union. Article 21 of the Charter prohibits discrimination based on a person’s religion within the EU.

Jakub Dudziak, spokesperson for the Polish Office for Foreigners, told AFP that “the conditions that must be met by foreigners to obtain a residence permit (...) depend on the specific purpose of their stay. Issues of nationality or religion do not determine the delivery of this type of document.”

This link details the requirements to obtain permanent residence in Poland, and does not make any mention of Islam. This page by the Polish Office for Foreigners includes data on all foreign residents in Poland by country of origin, including Muslim-majority countries such as Turkey.

Rafal Kostrzynski, spokesperson for the United Nations High Commissioner on Refugees in Poland, called the claim that Muslims migrants are banned from Poland “simply fake news.”

Kostrzynski added that of the 2,700 Russian nationals accepted as refugees in Poland in 2018, a significant portion came from Chechnya, a republic of the Russian Federation where Islam is the dominant religion.

To quantify terror attacks in Poland and Japan, AFP Fact Check used numbers provided by the Global Terrorism Database (GTD), a verified open-source database that provides information on terrorist events of all sorts around the world.

The GTD was developed by the University of Maryland’s National Consortium for the Study of Terrorism and Responses to Terrorism, and defines terrorism as “the threatened or actual use of force and violence by a non-state actor to attain a political, economic, religious, or social goal through fear, coercion, or intimidation.”

In 1995, 13 people died of exposure to the toxic sarin gas, which was released in the Tokyo subway by the Aum Supreme Truth doomsday cult, now called Aleph. Here is an AFP report from July 2018 when the last members of the cult were executed for their role in the attack.

In January 2019, Gdansk mayor Pawel Adamowicz was killed by stabbing while giving a speech at a charity event. Here is an AFP report on the attack.