No, the mother of Pakistan’s pilot hero Rashid Minhas has not died

Multiple online posts, which have been shared thousands of times, claim the mother of a long-dead Pakistani pilot and national hero has herself died aged 95. The claim is false; the woman is alive and has been discharged from hospital, her family confirmed.

The misleading posts include this one published on Facebook March 18, 2019, and shared more than 2,600 times since. It contains two images: one of the pilot, Rashid Minhas, in uniform; and one of his mother, Rasheeda Minhas, with her eyes closed.

The text across the top of the photos says in English: “Proud Mother of Shaheed Rashid Minhas died today. InshaAllah Son and his mother will meet in Jannah (paradise) today.”

The misleading post’s Urdu-language caption says: “Peace be upon the mother who had such a son." 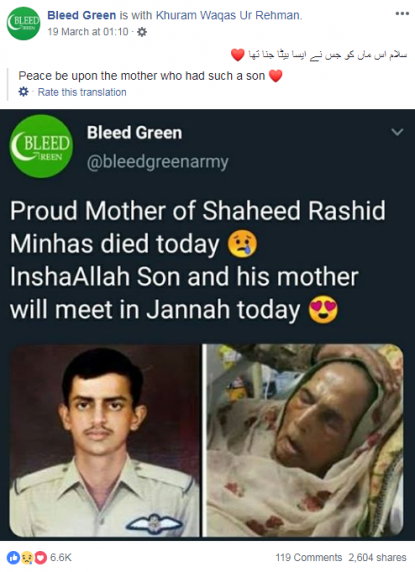 Pilot Rashid Minhas, who died aged 20, is the youngest person ever to be given Pakistan’s highest award for military gallantry, which was bestowed on him posthumously. Here is a report by Pakistani newspaper Dawn on Minhas.

Rashid’s brother Anjum Minhas told AFP by telephone that the posts were false.

"By the grace of Allah my mother is fine and is at her home after being discharged from hospital two days ago," he said.

"This rumour was spread on social media by some cheap people."

Anjum Minhas earlier told the Daily Pakistan newspaper a visitor to the hospital took the photo of Rasheeda Minhas that appeared online.

He also spoke to Urdu-language TV channel 24 News HD and said his mother was still alive, as seen in this clip from the network's verified YouTube account, embedded below:

On 24 News HD, Anjum Minhas said he was an administrator of this Facebook page dedicated to the memory of his brother, which has more than two million followers.

A photo of Rasheeda Minhas was shared here by that page on March 24 with a caption that said she had "fully recovered".