No, McDonald’s did not approve the ‘McJesus’ sculpture

Several posts shared hundreds of times on Facebook call for the boycott of fast food giant McDonald’s for allegedly approving the display of a Ronald McDonald figure pinned to a cross. The artist who created the sculpture said he did not seek permission from those he might ‘criticise or parody', and a McDonald's spokesman said: "We officially distance ourselves from this display."

In one Facebook post, shared over 420 times, a collage of posts and pictures of the “McJesus” sculpture are accompanied by a caption which reads:

“My brother's and sisters. Stand against this blatant blasphemy and boycott Mc Donalds. I live my conviction, I adore Jesus, I'm crazy in love with Him and I am NOT ashamed of the Gospel!!!!” 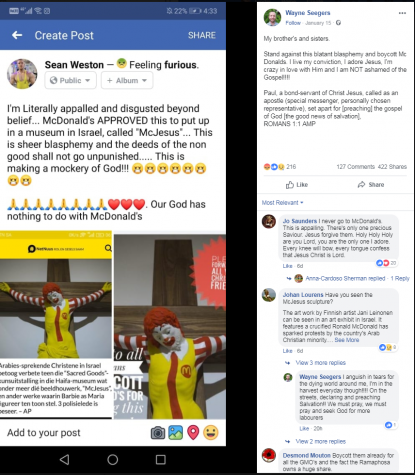 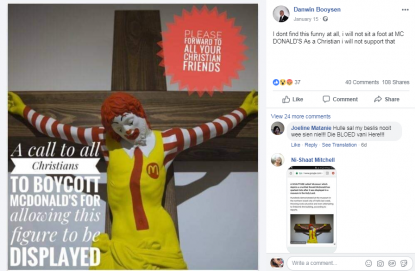 The “McJesus” sculpture was part of an exhibit called Sacred Goods at Haifa Museum of Art in Israel:

“The image of crucified Jesus appears as a subversive element in the works of Jani Leinonen, Magnus Gjoen, and Nick Stern – provocative works that address the collaboration between religious systems and the consumer culture,” reads the museum site.

Despite being on show since the summer, images of the exhibits only recently began circulating on social media, prompting a demonstration by Christians outside the museum, as reported by AFP.

The mayor of Haifa wrote on Facebook that the controversial exhibit would be removed "as soon as possible". Einat Kalish-Rotem's official Facebook page showed that the work was in any case to be returned to Finland by the end of the month.

"The remaining items will be hung in a closed room," she wrote.

Asked if McDonald’s knew or approved of the sculpture, Jani Leinonen told AFP he did not ask for permission for his artworks.

“I have no idea if McDonald’s knew about the work. Legally it is not an artist’s job to notify or ask permission from companies we might criticise or parody. I work a lot with brands and logos, and notifying all of their owners would be near impossible,” Leinonen said.

“McJesus is an old work that has been travelling the world.”

McDonald’s South Africa told AFP: "We officially distance ourselves from this display."

“We are a restaurant company and we do not engage in politics or religion,” said Daniel Padiachy, McDonald’s South Africa Chief Marketing and Communications Officer.