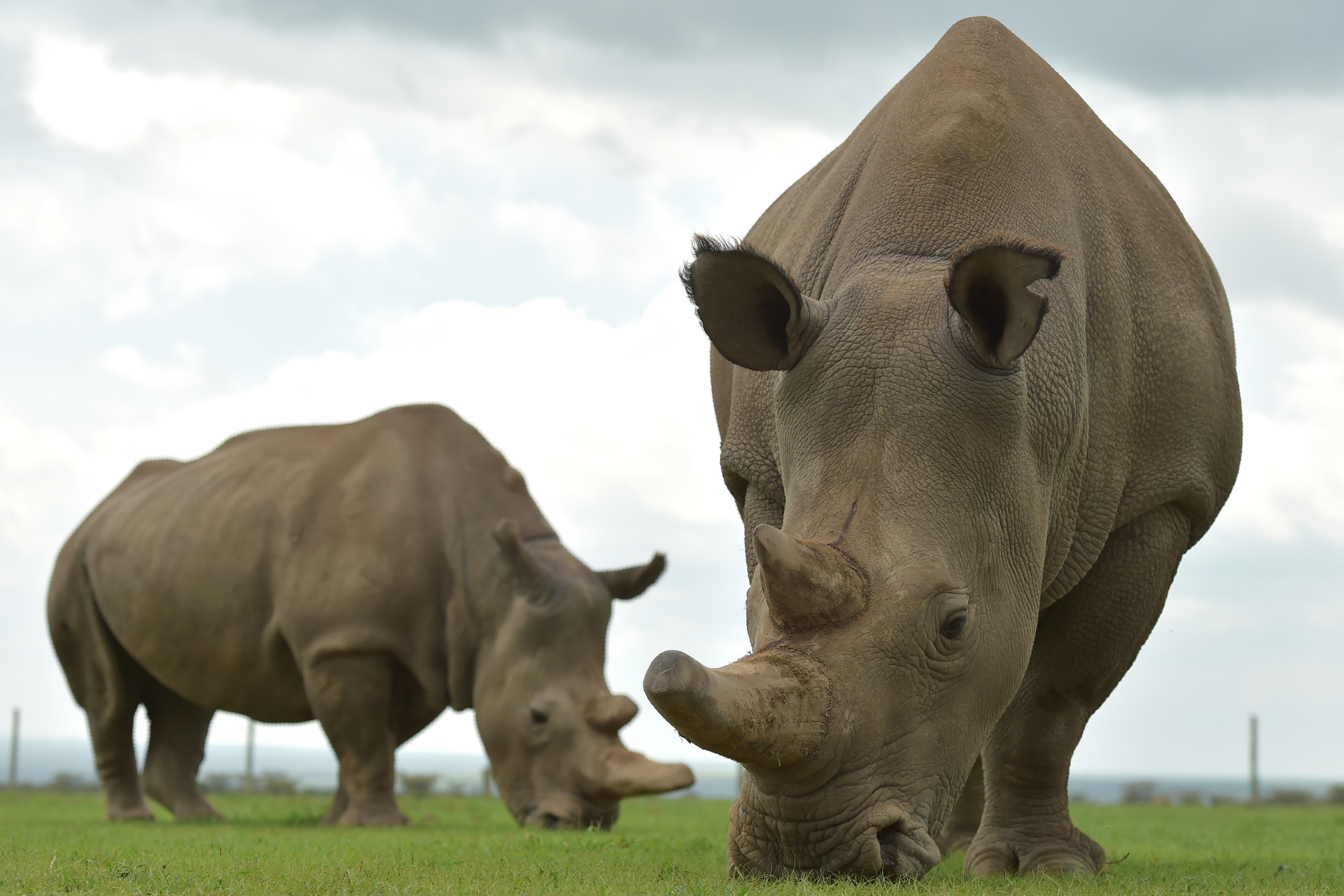 No, Kenya is not introducing the death penalty for wildlife poachers

Articles shared tens of thousands of times online have reported that Kenya is planning to introduce the death penalty for convicted wildlife poachers. The articles quote Tourism Minister Najib Balala, who is supposed to have made the announcement during a meeting held on May 10, 2018. However, Balala was not at that meeting, and told AFP there was no such plan. Capital punishment is in theory permitted in Kenya, but the country has an effective ban on carrying out death sentences. No death row prisoner has been executed since 1987.

Kenya, like several other African countries, has seen its elephant and rhino populations decimated by illegal poaching to feed a booming international trade in tusks and horns. Elephant ivory is often carved into ornaments or jewellery and rhino horns are used in traditional Asian medicine, with China representing the biggest market for such goods.

The articles about the supposed death penalty plan began appearing online in May 2018, shortly after the meeting during which Balala was reported to have made the announcement.

Animal poaching is a highly emotive subject, and some articles reporting the announcement have racked up more than 100,000 shares each.

One post published by South African site News360, which we’ve archived here, has been shared online 123,000 times, according to data from social media monitoring site CrowdTangle. Another, published on the website of Joseph Mercola -- a controversial alternative medicine practitioner in the United States -- has been shared more than 100,000 times. A quick Google search reveals that the death penalty claim has been repeated on a large number of websites.

Existing penalties against convicted poachers have “not been deterrence enough to curb poaching,” the articles quote Balala as saying.

In many of the articles, it’s unclear when or where Balala was supposed to have made his announcement, but the News360 article linked to a similar report from Britain’s Independent news website, dated May 13, 2018.

That article, in turn, attributed the comments to China’s Xinhua news agency, which published a report from Kenya’s Laikipia County on May 11, 2018, carrying the remarks from Balala.

According to Xinhua, Balala made the comments “during the official launch of the northern white rhino commemorative stamps at Ol Pejeta Conservancy located in Laikipia County on the slopes of Mount Kenya”. 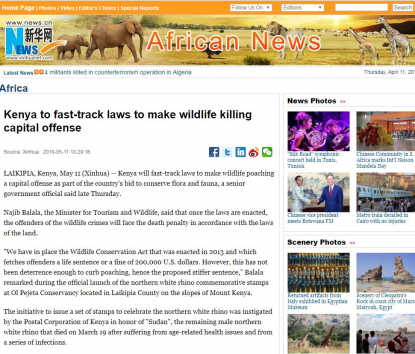 Screenshot taken on April 11, 2019 of the 'death penalty for poachers' story on Xinhua's website

That event was organised by the Postal Corporation of Kenya. However, a post on the organisation’s Facebook Page revealed that Balala was not at the event and was represented by Patrick Omondi, a former director of research monitoring and strategic initiative at the ministry of tourism. 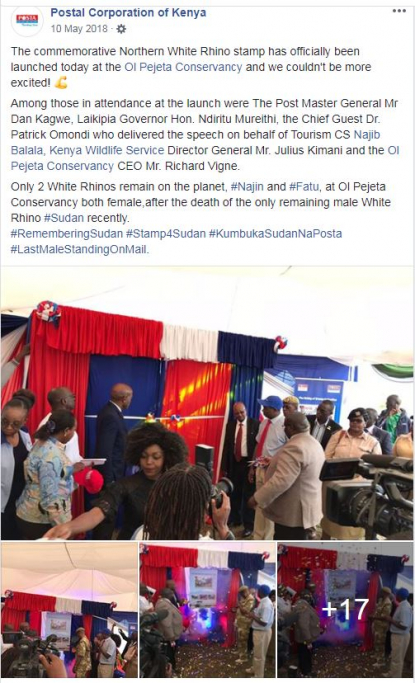 Omondi, who is now the biodiversity director at the Kenya Wildlife Service (KWS), told AFP that he had read out a statement on behalf of the minister at the event in Laikipia, and there had been no mention of the death penalty.

“That is misinformation,” Omondi said. “I was the one reading the minister’s statement at the meeting and I can tell you nothing I spoke on behalf of the minister was related to the death penalty for poachers.”

He added: "I think in that meeting one of the local leaders casually said that poachers should be killed but nothing official came from the ministry."

We asked Omondi if he still had a copy of the speech, but he no longer had access to it.

“It was a long time ago when I was in the minister’s office and since then I have been transferred to KWS. The secretaries at the office have also not been able to get the speech,”  he said.

On February 7, 2020, the tourism and wildlife ministry sent AFP a copy of the speech, which contains no mention of the penalty. You can find a PDF version of the speech below.

There is no record of any official statement from the Kenyan government announcing a move to introduce the death penalty for convicted poachers.

The Independent, at the time of publication last year, said they had reached out to Kenyan authorities for confirmation of the policy change. The website updated its article on Friday noting AFP's fact-check and saying they had contacted Kenyan authorities again.

Kenya has no plans to introduce the death penalty for poachers

The KWS biodiversity director added that there was no plan to introduce the death penalty in Kenya as a punishment for poachers.

On March 31, 2018, during the funeral of the world’s last male northern white rhino, Balala had warned poachers they would face stiffer punishments -- but made no mention of the death penalty.

“We are going to change our laws, Anybody who is caught with ivory or killing wildlife will be jailed for life. That is what we want to do,” he said. You can see him making the comments in this video:

The tourism minister has been advocating for stiffer punishments for poachers and in a phone interview with AFP on April 11, 2019, he said the current penalties were not proportionate to the damage caused by poachers.

"I have been pushing for harsher punishment because what we currently have does not add up at all. A kilo of ivory costs about $60,000 and the fine for a poacher who caught many kilos of ivory is only about $199,000. If you compare this, it seems to be a mere slap on the wrist," he said.

"But this does not mean death penalty -- that, I assure you, was taken out of context. We can have the fines increased, longer jail terms and ensure that the poachers do not easily get away by paying fines."

Balala added that though poaching seems to be on the decline in Kenya,  campaigns to close down legal markets in Asia and elsewhere needed to be more vigorous.

Poachers convicted of the most serious offences in Kenya can in fact already be handed a life sentence under the Wildlife Conservation and Management Act of 2013.

The law sets out the punishments for various convictions, ranging from a minimum fine of one million shillings ($9,909) and/or five years in prison for those dealing in tusks, horns and other “trophies”, to up to 20 million shillings in fines and life behind bars for “endangered or threatened species”.

Kenya’s penal code allows for capital punishment, but in December 2017 the Supreme Court ruled that the mandatory issuing of the death sentence for crimes such as murder, treason and armed robbery was unconstitutional.

In practical terms, there is an effective ban on the death penalty in Kenya: no one has been executed since 1987, and in 2009 the then president Mwai Kibaki commuted the sentences of all those on death row to life imprisonment.