No, Jakarta’s jailed former governor has not been released from prison

An English translation of the article in Beritanewsupdate.pw, published on Facebook on July 10, 2018, reads: “Viral. A Video of Ahok being released on parole. Prabowo: this must be a Jokowi plot!!”  It also carries the sub-headline in red lettering “Ahok is free”. 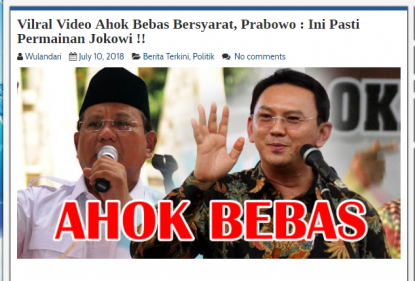 Snapshot of the article

The headline refers to Prabowo Subianto, an opposition politician expected to run against President Joko Widodo in 2019 national elections.

Ahok is a political ally of Widodo, who is better known as Jokowi.

Ahok is serving a two-year prison sentence for blasphemy.

An English translation of Subianto’s purported comments about the former governor’s supposed release reads: “This is clearly a political scheme... The evidence is clear that Ahok has not been released in a transparent way. There must be a mistake in this case.”

The article has been shared hundreds of times in at least three Facebook groups – including one called “Teman Jokowi Ahok” (Friends of Jokowi and Ahok).

A similar video that claims to show Ahok’s release has been viewed thousands of times on a series of YouTube clips, including this one uploaded on July 9.

“He has yet to be released from prison,” Syukur told AFP.

Ahok is in fact eligible to apply for parole under Indonesian early release regulations, but he has opted to serve out his full two-year term, which is officially done in May 2019, she said.

Ade Kusmanto, a spokesman for Indonesia’s prison system, also confirmed that Ahok has not been released.

Andre Rosiade, a spokesman for Prabowo’s Gerindra party, denied that the politician made the comments attributed to him, which was backed up by no mainstream media reporting the comments.

“I’ve never heard any statement from Prabowo like what’s written in the article. Also there is no mainstream media that has reported such comments,” Rosiade said.